The President of Portugal Mr Marcelo Rebelo de Sousa has paid a four days visit to India for the first time from 13-16 February 2020 on the invitation of the President of India, Shri Ram Nath Kovind. He was accompanied by Minister of State and Foreign Affairs, Professor Augusto Santos Silva, Secretary of State for Internationalization, Professor Eurico Brilhante Dias and Secretary of State for National Defense, Mr. Jorge Seguro Sanches.  The last visit by a President of Portugal (Prof. Anibal Antonio Cavaco Silva) to India was in 2007. 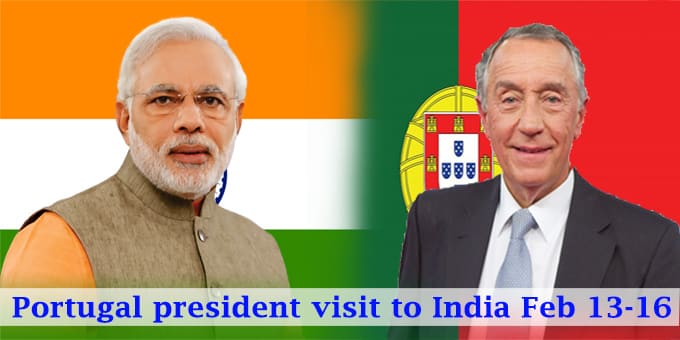 Meeting with PM Modi
On 14 Feb 2020, Mr. Jorge Seguro Sanches was accorded a ceremonial welcome at Rashtrapati Bhavan in New Delhi followed by a visit to Rajghat. After that he met with Prime Minister Narendra Modi and held extensive talks on the expansion of  bilateral ties including in areas of trade, investment and education.

Visit to Goa; 3 MoUs signed
Marcelo Rebelo de Sousa of Portugal arrived in Goa on 15 Feb 2020, on a two-day visit. There he inaugurated a seminar on urban designs organised by state-run Imagine Panaji Smart City Development Limited. He visited churches in Old Goa, including the Basilica of Bom Jesus where relics of St Francis Xavier are preserved.

ii.An agreement was also signed between University of Coimbra in Portugal and Goa’s G K Kare College of Law in the “scientific field of law and in the field of Portuguese language and culture”.

iii.Agreements were also signed in the field of design and supply of ships in Africa and Latin American countries, marine engineering, shipbuilding technology, ocean resources and technology and others.

Portugal supports New Delhi’s bid for UNSC permanent membership
Portugal Portugal extended support for India’s bid for a permanent seat in the United Nations Security Council (UNSC). India will participate in the 2020 UN Ocean Conference to be held between June 2-6 in Lisbon in Portugal.