The Cabinet Committee on Economic Affairs (CCEA) Chaired by the Prime Minister Shri Narendra Modi has approved the following proposals on December 4, 2019. The approval in detail are as follows, 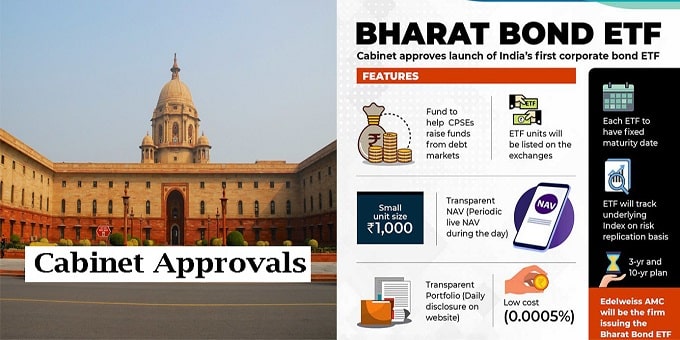 i.Meanwhile implementation of the International Exhibition and Convention Centre (IECC) project, is expected to be completed in the year 2020-2021. The govt. gave the approval to revolutionise India’s infrastructure and tourism with best standard and service by making the project a world class IECC.

ii.Hotel project tracking: The hotel project at Pragati Maidan, will be tracked by SPV by selecting a suitable developer and operator third party through a transparent competitive bidding process to construct, run and manage (directly or through a professional brand) the hotel on a long-term fixed lease basis.

iii.By this project, the turnout at the trade fair is expected to increase benefiting the participating traders, entrepreneurs and visitors. The trade fair will promote Indian goods and service at a wider range.

iv.Special Purpose Vehicle: A Special Purpose Vehicle (SPV) is a separate legal entity created by an organization. The SPV is a distinct company with its own assets and liabilities, as well as its own legal status. Usually, they are created for a specific objective, mainly to isolate financial risk.

Cabinet approved Personal Data Protection Bill, 2019:
The CCEA approved Personal Data Protection Bill. The bill proposes a penalty of up to Rs 15 crore or 4% of an entity’s global revenue and up to 3-year jail term for company executives who violate privacy norms. The bill mandates storage of critical data of individuals by internet companies within the country. Sensitive data can be transferred overseas only after explicit consent of the data owner. Critical data will be defined by the govt from time to time. The bill has been approved and will be introduced during the current winter session.

i.Bill: The bill has provisions to grant the right to be forgotten to data owners as well as right to erase, correct and porting of data. It also exempted processing of personal data in case of national security issues, court order etc. Entities will be given up to 2 years to make changes in their operations to adhere to the provisions of the Data Protection Bill.

ii.Bill draft: The bill was drafted after Supreme Court’s (SC) judgement in August 2017 that declared ‘Right to Privacy’ a fundamental right. After the judgment, a strong personal data protection regime was further highlighted by the apex court in its judgement in September 2018. Personal Data Protection Bill, 2018, was prepared by a high-level expert group headed by former SC judge Bellur Narayanaswamy Srikrishna.

iv.Minor violations penalty: A penalty of Rs 5 crore or 2% of the global turnover with provision of jail term for officers will be made incase of minor violations.

v.A company’s executive in-charge of conduct of the data business would face a jail term of up to 3 years if found guilty of knowingly matching anonymous data with publicly available information to find the identity of an individual called ‘re-identify de-identified data‘ in technical parlance (particular way of using words).

vi.At present, the Reserve Bank of India(RBI) orders stipulate that private entities should not store payments data outside the country. If taken out of the country for processing they have to be brought back within 24 hours.

Union Cabinet cleared Citizenship Amendment Bill 2019:
The union cabinet cleared the Citizenship (Amendment) Bill, 2019. This bill seeks to amend Citizenship Act, 1955 by seeking to grant citizenship to undocumented non-Muslims from Bangladesh, Pakistan and Afghanistan who came to India on or before December 31, 2014.

Bill purpose: The bill would enable acquisition of Indian citizenship by persons who were forced to seek shelter in India due to fear of on grounds of religion. The bill will provide ease in obtaining citizenship.

ii.Citizenship: The Bill will enable a person belonging to the above mentioned six religious communities who do not have proof of birth of his parents in support of his being Indian origin, to apply for citizenship by completing six years of residency period in India.

Cabinet approved to withdraw J&K reservation Bill from Parliament:
The CCEA approved to withdraw the Jammu and Kashmir Reservation (Second Amendment) Bill 2019 that seeks to provide reservation to economically backward people of J&K, as the state reorganisation law provided for a similar quota. The bill has been withdrawn as the draft law became irrelevant as the law providing the quota are now applicable to union territories post repeal of special provisions under Article 370 (special status to J&K).

i.Ceiling of Rs.10,000 as maintenance towards welfare of parents will be removed under the bill and it includes to dispose of applications of senior citizens above eighty years of age.

Key Points:
The bill’s purpose is to make the 3 universities a place of Sanskrit learning making it nationally and internationally a reputed one.