On 4th December 2019, a study done by Comparitech, Britain-based tech research firm, states that India ranks 5th along with Taiwan, Indonesia and the Philippines in the list of invasive use of Biometrics while China, Malaysia and Pakistan come before India in the list. India’s performance could have been worse if the Aadhar, India’s national biometric database had been under the access of Police and other investigation agencies. 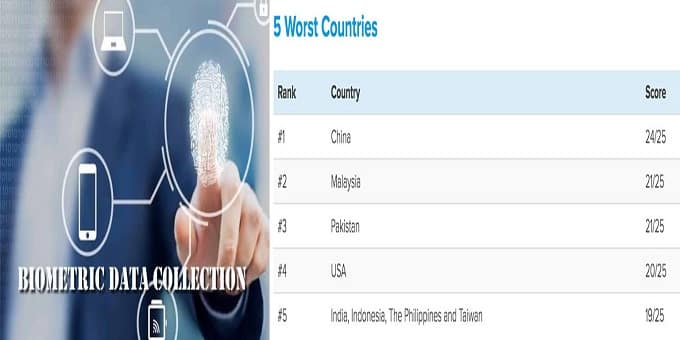 i.The analysis includes 50 countries evaluated on five different aspects like Visas and Biometric systems and how the data is being collected and stored. The analysis was done to compare the usage of Biometrics among different countries. The score was out of 25 in which India, Indonesia and the Philippines gained a score of 19 while China, Malaysia, the United States of America (USA) and Pakistan gained 24, 21, 21 and 20 respectively.

ii.The report also stated that the countries from the European Union had a lower score because of the General Data Protection Regulation (GDPR) which involves the controlling and processing of personal information.

iii. The countries with the lowest ranks include Ireland and Portugal with a score of 11 and Cyprus, United Kingdom (UK) and Romania with a score of 12 making them the five best countries in the collection, storage and use of Biometrics.

List of top Ranks in the invasive use of Biometrics: