On December 30, 2019, the Union Minister for Environment, Forest and Climate Change(MoEFCC), Shri Prakash Javadekar released the biennial “India State of Forest Report (ISFR)”, in New Delhi. The report assesses forest and tree resources in India biennially and is published by the Forest Survey of India (FSI). The ISFR-2019 is the 16th report in the series since 1987. 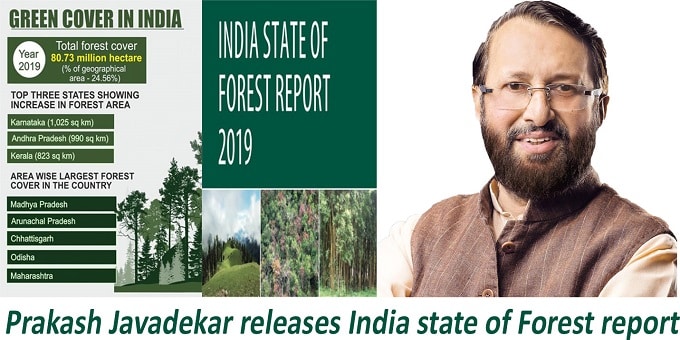 i.Top states with increased forest cover: Karnataka topped among the states with an increase in forest cover with area of coverage of 1,025 sq. km. it was followed by Andhra Pradesh (990 sq km) and Kerala (823 sq km) in the 2nd and 3rd place respectively.

ii.Area wise toppers:  In terms of largest forest cover in the country by area wise, Madhya Pradesh (MP) has the largest forest cover. It was followed by Arunachal Pradesh, Chhattisgarh, Odisha and Maharashtra in the 2nd, 3rd, 4th and 5th place respectively.

iv.Top rankers in mangrove coverage: Mangrove cover in the country has been separately reported in the ISFR 2019 and the total mangrove cover is 4,975 sq km which has increased by 54 sq Km compared to the previous assessment of 2017. Top three states showing mangrove cover increase are Gujarat (37 sq km) followed by Maharashtra (16 sq km) and Odisha (8 sq km) in the 1st, 2d and 3rd rank respectively.

ix.Fire prone area coverage: The present report fire prone forest areas of different severity classes were mapped in the grids of 5km x 5km based on the frequency of forest fires in the last 14 years.