On December 4, 2019, According to the 15th edition of  “Global Climate Risk Index (CRI) 2020: Who Suffers Most from Extreme Weather Events? Weather-Related Loss Events in 2018 and 1999 to 2018” released by Germanwatch (a non-profit, non-governmental organization based in Bonn, Germany), India ranked 5th in the global list of most climate-affected country in 2018 with the CRI score of 18.17 .India’s rank has worsened from the 14th position in 2017 due to severe rainfalls, followed by heavy flooding and landslides that killed over 1000 people. 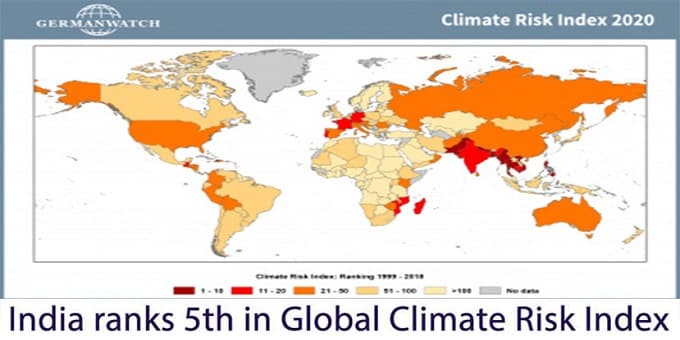 Japan topped the list of the most affected countries with the CRI score of 5.50. It was severely affected by three strong extreme weather events (including Typhoon Jebi in September 2018) during 2018.

i.The report  was on 181 countries and quantifying the impacts of climate change through economic fatalities.
Here’s the list of top 5 most climate affected countries in 2018:

iii.This list has been made in view of the increase in temperature.A total  of 138 people were killed due to extreme heatwave condition & more than  7000 people were hospitalized due to heat strokes and heat exhaustion in the year 2018.

v.The report was presented on the sidelines of the 2019 United Nations (UN) Climate Change Conference (also known as Conference of the Parties (COP) 25 climate summit 2019) is being held in Madrid, Spain. The event was organized by the Organization of the United Nations Member States to set the framework for environmental improvement.