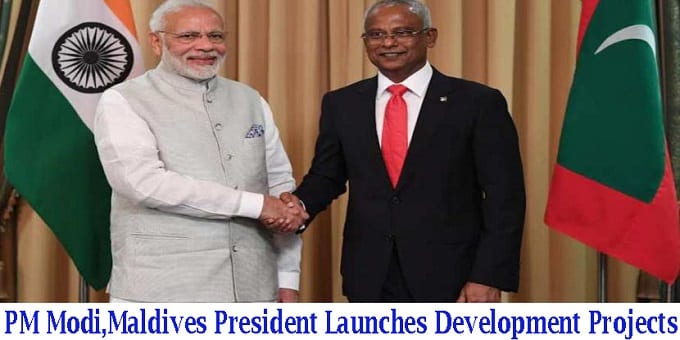 Other projects:
PM Modi also announced the govt’s work on building cancer hospital and cricket stadium in Hulhumale island of Maldives and also about the water and sanitation project in 34 islands to begin soon.

i.The CGS Kaamiyaab would help in enhancing the maldives’ maritime security, and also promote blue economy (use of ocean resources for economic growth, improved livelihoods etc) and tourism. It was handed over to the Maldives National Defence Force (MNDF). It was constructed by L&T (Larsen & Toubro) in Gujarat.

ii.The launch of RuPay payment system in Maldives would enhance ease of travel for Indians travelling to Maldives. It was launched by the Memorandum of Understanding(MoU) signed by the National Payments Corporation of India (NPCI) and the Bank of Maldives (BML).

iii.In 2019, tourist arrivals from India to the Maldives have doubled and India has risen from 5th to the 2nd position in its tourism market. The RuPay payment system will enhance the people for smooth payment in the country.

iv.India recently donated 2,500 LED streetlights that had been installed in Male. This would save 80% energy.

v.The community projects are being implemented under the MoU signed during (former foreign minister) Sushma Swaraj’s visit to Maldives in 2019.

vi.The Indian government’s ‘Neighbourhood First’ and the Maldives Government’s “India First” policies have strengthened bilateral cooperation in all sectors between the two nations. ‘Neighbourhood First Policy’ which means giving priority to the Neighboring countries, addresses the need for regional integration in South Asia in the era of globalization.