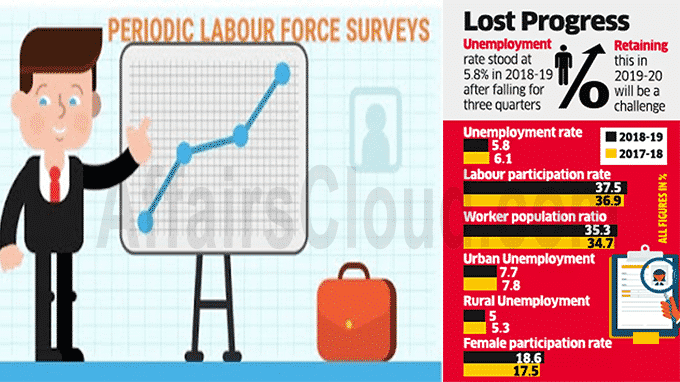 In accordance with the annual Periodic Labour Force Survey (PLFS) for [July 2018 – June 2019] of National Statistical Office (NSO), Ministry of Statistics and Programme Implementation (MoSPI), India’s unemployment rate fell between July 2018 and June 2019 to 5.8% from 6.1% during the same period of 2017-18 while the Indian economy grew 6.1% in 2018-19, slower than the 7% expansion recorded the year before.

Though unemployment rate has decreased as per annual PLFS report in 2018-19, but, according to the monthly data from the Centre for Monitoring Indian Economy, the unemployment rate in India rose significantly from 7.87% in June 2019 to 23.48% in May 2020.

PLFS is India’s first computer-based survey which gives estimates of key employment and unemployment indicators like the labour force participation rate, worker population ratio, proportion unemployed and unemployment rate in rural households annually and on a quarterly basis for the urban households.