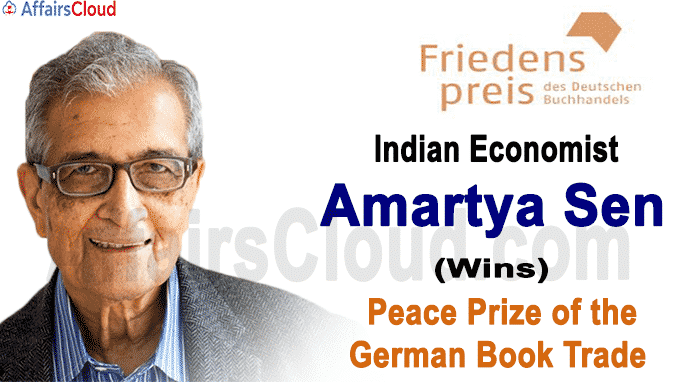 On June 20, 2020, Indian economist, philosopher and Nobel Laureate Amartya Kumar Sen (86) has been selected for 2020 Peace Prize by the Board of Trustees of the Peace Prize of the German Book Trade for his decades-long work around issues of global justice.

-Born on 3 November 1933 in Santiniketan (West Bengal), Professor Amartya Sen, who teaches at Harvard University in the US, has also been awarded the Nobel Prize in 1998 for Economics.

-He spent his childhood in the shadow of the ongoing independence movements in India in the 1940s. A witness to the Bengal famine in 1943 and the bloody conflict and riots between Hindu-Muslims at the time of India’s independence in 1947,

-Sen obtained a bachelor’s degree in economics from the Presidency College in Kolkata in 1959. Sen gave the concept of public welfare economics and wrote many books on many aspects of social welfare and development.