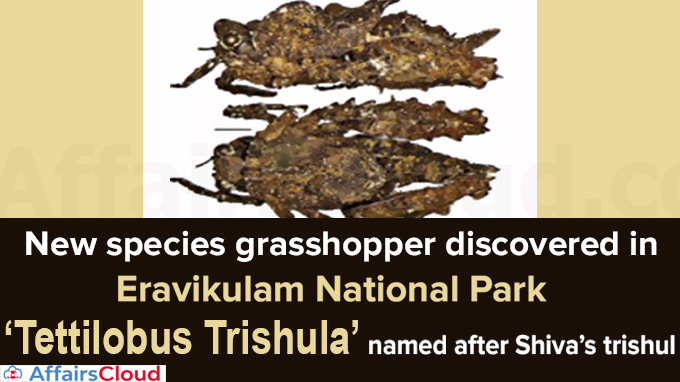 ii.The discovery has been published in the Journal Zootaxa.

iii.Shiva’s Pygmy Trishula is set to be added in the list of 30 target species under the Red List Assessment of Grasshoppers in India, which is being initiated by the Grasshopper Specialist Group of the IUCN.

i.It is found in the dense rainforests of Western Ghats and also in Sri Lanka.

ii.It feeds on mosses and detritus.

iii.Around 200 species of pygmy grasshopper species are found in the Indian subcontinent alone.

i.The Researchers found an old specimen collected 100 years ago from the border between Kerala & Tamil Nadu during their visit to the National History Museum in Madrid, Spain, it was labelled ‘Potua suspecta’ by Ignacio Bolivar but was never published as a new species.

ii.Later in 2018 Dhaneesh Bhaskar observed the species ‘Potua suspecta’ in its natural habitat (Western Ghats) and collected one male specimen to reaffirm it.

i.On May 23, 2020, A team of scientists led by K.A. Sujana at the Kolkata based Botanical Survey of India (BSI) have discovered 3 new plant species namely- Eugenia sphaerocarpa, Goniothalamus sericeus and Memecylon nervosum at the Western Ghats in Kerala and Tamil Nadu (TN).

About International Union for Conservation of Nature (IUCN):