On December 12, 2019, the Maharashtra minister Eknath Shinde has approved in the state cabinet to name the under-construction Mumbai Nagpur Super Communication Expressway also known as Maharashtra Samruddhi Mahamarg after Shiv Sena party founder late Bal Keshav Thackeray. The cabinet also approved an additional share capital of Rs. 3,500 crores to reduce the burden of loan that will be raised for this project. This in turn will bring down the interest amount by Rs. 2,500 crores. 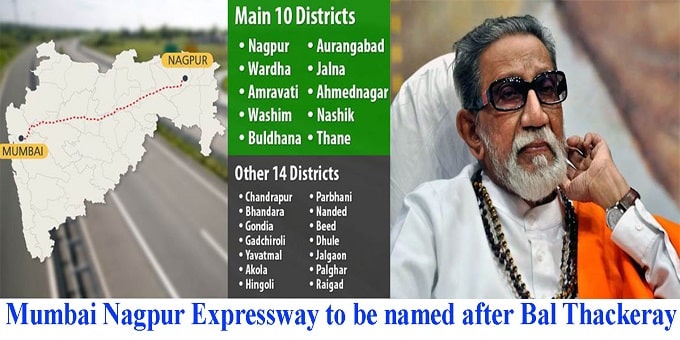 i.Maharashtra Samruddhi Mahamarg: 701 km (436 mi) long, 8 lane expressway, connecting the two capitals of Maharashtra Nagpur and Mumbai, which is scheduled to be completed in 2021. it’s expected to cut travel time between the two cities to 8 hours.

ii.Project Cost: The estimated total cost of the project is around Rs. 55,335 crores.  The road construction of the project will be completed within the next 3 years.

iii.Share capital: The State’s existing share capital in the project is Rs. 27,335 crores.

iv.The previous government, led by the Bharatiya Janata Party(BJP), also planned to name the expressway after late Atal Bihari Vajpayee (Former Prime Minister of India) and had even submitted the proposal for the same to then chief minister Devendra Fadnavis.

v.Bal Thackeray: Bal Keshav Thackeray born on 23 January 1926 was an Indian politician who founded the Shiv Sena, a right-wing pro-Marathi and Hindu nationalist party active mainly in the state of Maharashtra. The party was named after was after the 17th century Maratha king Shivaji (“Shiv Sena”-Shivaji’s Army).