Dear Readers & Aspirants, We collected some important points in MODI schemes: Rural infrastructure  and make it in PDF format. We Hope it will definitely help you for your SBI PO,IBPS,RBI assistant and many more upcoming Exams. All the Best My Dear Aspirants & Readers.

OBJECTIVE OF SAGY
• Leveraging the leadership, capacity, commitment and energy of the Members of Parliament (MP) to develop model Gram Panchayats.
• Engaging with and mobilizing the community for participatory local level development.
• Converging different government programmes and private and voluntary initiatives to achieve comprehensive development in tune with people’s aspirations and local potential.
• Building partnerships with voluntary organisations, co-operatives and academic and research institutions.
• Focusing on outcomes and sustainability 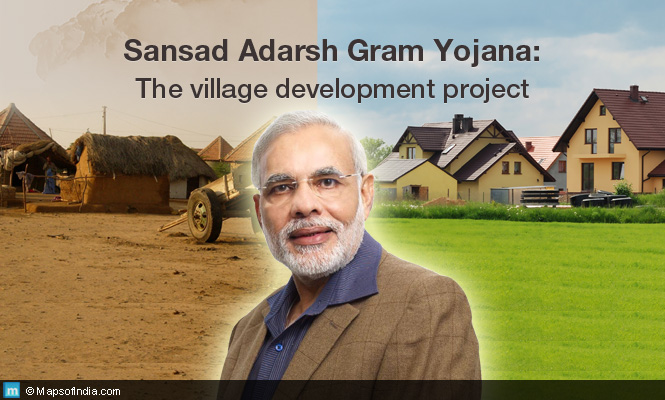 ACTIVITIES
ADARSH GRAM An Adarsh Gram should evolve out of people’s shared vision, using their capacities and available resources to the best extent possible, duly facilitated by the MP, theGram Panchayat, civil society and the government machinery. Naturally, the elements of an Adarsh Gram would be context specific. However, it is still possible to broadly identify the important activities.

i. Activities for promotion of voluntarism like Bharat Nirman Volunteers
ii. Building the capacity of the people to fully participate and contribute to local development
iii. Activities for honouring village elders, local role models especially women, freedom fighters and martyrs
iv. Activities for violence and crime free villages such as:
a. Setting up Citizen Committees
b. Sensitization, especially of youth
v. Village sports and folk arts festivals
vi. Having a village song to instil a sense of pride among the people
vii. Celebrating ‘Village Day’
viii. Proactive steps for inclusion and integration of socially excluded groups, especially Scheduled Castes and Scheduled Tribes.

i. Activities for a clean and green village consisting of:
a. Providing toilets in each household and in all public institutions and ensuring their proper use
b. Appropriate solid and liquid waste management
ii. Roadside plantations
iii. Tree plantation in accordance with local preferences in homesteads, schools and public institutions – including green walkways
iv. Social forestry
v. Watershed management especially renovation and revival of traditional water bodies
vi. Rainwater harvesting- rooftop as well as others
vii. Reducing local pollution of air, water and land

i. Strengthening of local democracy through strong and accountable Gram Panchayats and active Gram Sabhas
ii. E-Governance resulting in better service delivery
iii. Provision of UIDAI cards to all
iv. Ensuring regular and punctual attendance of government and panchayat staff
v. Time bound service delivery in line with Department’s Citizens Charter
vi. Holding of Mahila Gram Sabhas before every Gram Sabha
vii. Holding of a Gram Sabha at least 4 times a year
viii. Holding of Bal Sabhas every quarter
ix. Proactive disclosure of all information pertaining to the implementation of the programme in the public domain and through wall-writing, notice boards in the local language. This should necessarily include the list of beneficiaries, item-wise budgets and expenditure.
x. Gram Panchayat acting as an information facilitation centre
xi. Timely redressal of grievances filed by people, such that: Grievances of all nature to be submitted to the Gram Panchayat / Charge Officer and dated receipt to be given
2. Grievances to be redressed within three weeks along with written reply
3. Institutionalization of regular open platforms for airing of grievances and
their redressal, coordinated by the Gram Panchayat
xii. Half yearly Social Audit of the programme implementation by the Gram Sabha facilitated by the Social Audit Units set up under MGNREGA

The Union Cabinet, chaired by the Prime Minister Shri Narendra Modi, today approved the launch of Deendayal Upadhyaya Gram Jyoti Yojana (DDUGJY) with components
–>To separate agriculture and non agriculture feeders facilitating judicious rostering of supply to agricultural and non-agricultural consumers in rural areas
–>strengthening and augmentation of sub transmission and distribution infrastructure in rural areas, including metering of distribution transformers/feeders/consumers.
The estimated cost of the scheme for above two components is Rs.43,033 crore which includes the requirement of budgetary support of Rs.33,453 crore from Government of India over the entire implementation period.
The Cabinet further approved, that the balance work relating to rural electrification as per CCEA’s approval in August, 2013 with the norms of the ongoing scheme of RGGVY in 12th and 13th Plans will get subsumed in DDUGJY as a distinct component for rural electrification, for which CCEA has already approved the scheme cost of Rs.39,275 crore including budgetary support of Rs.35,447 crore. This outlay will be carried forward to the new scheme of DDUGJY in addition to the outlay of Rs.43,033 crore. 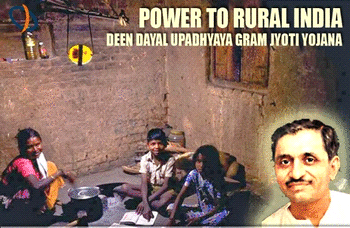 Jyotigram Yojana is an initiative of the Government of Gujarat to ensure availability of 24-hour three phase quality power supply to rural areas of the state and to supply power to farmers residing in scattered farm houses through feeders having specially designed transformers.
The scheme was dedicated to the nation by President A. P. J. Abdul Kalam in 2006. Stockholm International Water Institute (SIWI) has commended the scheme saying Jyotigram scheme has radically improved the quality of village life, spurred non-farm economic enterprises, and halved the power subsidy in agriculture.Government of India is set to accept Gujarat’s Jyotigram project as a flagship scheme for the 12th five year plan . Government of India (GoI) is all set to accept Gujarat’s Jyotigram project as a flagship scheme for the 12th five year plan (2012-17) in the power sector for supplying round-the-clock, high-quality three-phase power to all villages. Commissioned in 2006, Jyotigram provides for a separate electric feeder for domestic use and a limited agricultural supply of nearly eight hours a day, continuous and of constant voltage.
A just-released Planning Commission draft titled Faster, Sustainable and More Inclusive Growth: An Approach to the 12th Five Year Plan, says that the separation of agricultural feeders in the country will enable villages to get 24 X 7 three-phased power for domestic uses, schools, hospitals and village industries”. As for the farm pump sets, which require much more power, they can obtain “eight hours or more of quality power on a pre-announced schedule”.

The project underlines
The program of feeder separation has to be carried through across the country. Gujarat has achieved very good results by combining feeder separation with an extensive watershed program for groundwater recharge. Punjab, Karnataka, Andhra Pradesh, Maharashtra and Madhya Pradesh have also moved forward in this direction. Feeder separation needs to be extended to all states, especially where groundwater is extensively used.