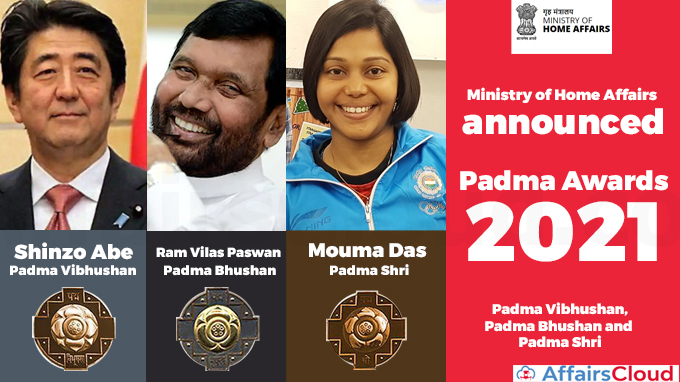 On January 25, 2021 Ministry of Home Affairs, Government of India announced the Padma Awards 2021. The Padma Awards, one of the highest civilian Awards of the country are conferred under 3 categories namely, Padma Vibhushan, Padma Bhushan and Padma Shri. This year(2021) total 119 Padma awards including 1 duo case (in a duo case, the Award is counted as one) were awarded.

i.This year(2021) the President of India, Ram Nath Kovind has approved conferment of the awards.

ii.Usually, the President of India confers the awards at a ceremonial function held at Rashtrapati Bhawan usually around March/ April every year.

What are Padma Awards?

i.It is the second-highest civilian award of India, after the Bharat Ratna.

ii.It is given for exceptional and distinguished service.

It is the third-highest civilian award and is conferred for distinguished service of a high order.

i.Ram Vilas Paswan(Posthumous), who was the Union Minister of Consumer Affairs, Food and Public Distribution (elected from the Hajipur constituency of Bihar) was honoured with Padma Bhushan 2021.

ii.Apart from him, Tarun Gogoi, former Assam CM who was the longest serving CM of the state  and prominent Shia preacher Maulana Kalbe Sadiq received this award.

iv.In addition to them, the following are the list of awardees:

About Ministry of Home Affairs