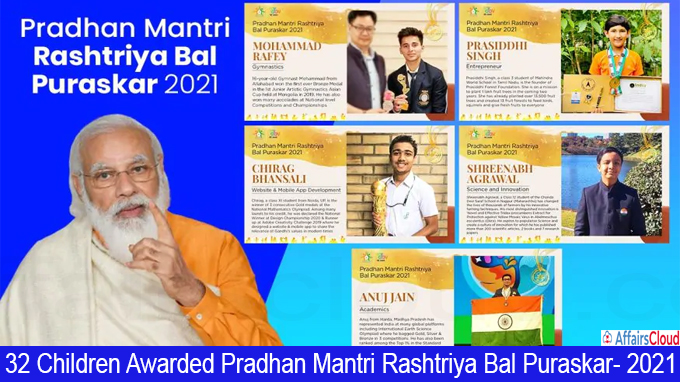 On January 25, 2021 The Government of India conferred Pradhan Mantri Rashtriya Bal Puraskar(PMRBP) 2021 to 32 children under 6 categories, namely innovation, scholastic, sports, arts & culture, social service and bravery. This award was instituted by the Ministry of Women and Child Development(MoWCD), Government of India in 1996.

Total Awards Conferred in Each Category

ii.The Awards are given by the President of India in Darbar Hall, Rashtrapati Bhavan in the week preceding Republic Day every year.

iii.Bal Shakti Puraskar awardee gets a medal, a cash prize of Rs 1 lakh, a certificate and a citation.

i.Chirag Bhansali(16 year old) from Noida’s Delhi Public School was conferred with the 2021 PMRBP for launching his website and mobile application called ‘Swadeshi Tech’, which acts as an alternative to Chinese apps.

ii.Veer Kashyap(10-year-old) received this award for building a  board game ‘Corona Yuga’ during the lockdown in Bengaluru and posted it on YouTube, where it went viral.

On 10th December, 2020 Federation of Indian Commerce and Industry (FICCI) virtually presented India Sports Awards-2020, to sports personalities for their outstanding contributions in the field of sports.Wrestler Bajrang Punia and Shooter Elavenil Valarivan received the highest honour “Sportsperson of the Year of Men & Female” Award respectively.

About Ministry of Women and Child Development(MoWCD):