As per World Health Organization (WHO) Report on the Global Tobacco Epidemic, 2017, launched at the United Nations on July 19, 2017, several countries have implemented tobacco control policies, ranging from graphic pack warnings and advertising bans to no smoking areas.

Highlights of WHO Report on the Global Tobacco Epidemic, 2017:

MPOWER comprise country-level measures to reduce the demand for tobacco, as ratified by the World Health Organization (WHO) Framework Convention on Tobacco Control. Components of MPOWER are as follows: 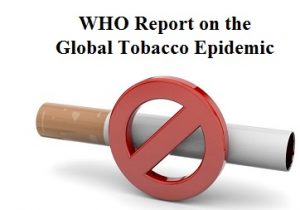 WHO is a specialised agency of the United Nations that is concerned with international public health.