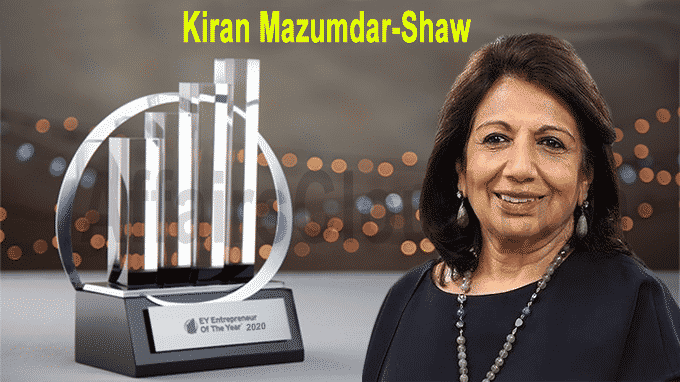 On June 4, 2020 Kiran Mazumdar-Shaw(67 years old), Executive Chairperson of India-based Biocon Limited was named as EY World Entrepreneur Of The Year 2020 for her contribution to improve access to affordable life-saving medicine & transform the world in one of its kind virtual entrepreneurship award ceremony. She became the 3rd Indian to win this award, after Uday Kotak of Kotak Mahindra Bank (2014) and Narayana Murthy of Infosys Technologies Limited (2005)

i.Kiran Mazumdar-Shaw founded Biocon, a bio-enzymes company in 1978 and her firm became the 1st Indian company to export enzymes to the US and Europe.

ii.Graduation– Graduated as a Master Brewer from a brewing school in Australia and returned to India in 1975

About EY Entrepreneur Of The Year:

EY World Entrepreneur Of The Year honors the innovative business leaders who have unstoppable vision and stop at nothing to achieve their ambition to make a difference. It celebrates entrepreneurs with regional and national award programs in more than 145 cities in over 60 countries.

About EY:
It may refer to one or more of the member firms of Ernst & Young Global Limited, each of which is a separate legal entity. The 28 regions of EY are grouped under three geographic Areas: Americas; Europe, Middle East, India and Africa(EMEIA); and Asia-Pacific.
EY Global Chairman and CEO– Carmine Di Sibio