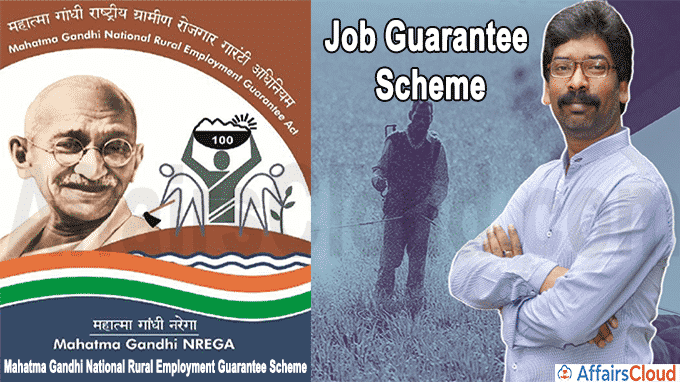 On 21st June 2020, Jharkhand is set to launch a 100-day employment scheme “Mukhyamantri SHRAMIK (Shahri Rozgar Manjuri for Kamgar) Yojna” to enhance the livelihood and security of urban poor. This scheme is in line with the Mahatma Gandhi National Rural Employment Guarantee Scheme (MGNREGS).

Note:After Kerala’s Ayyankali Urban Employment Guarantee Scheme (AUEGS), Jharkhand is the 2nd state in the country to launch a job guarantee scheme for the urban poor.

Aim of the scheme:

To provide guaranteed employment for unskilled poor workers in urban regions to increase employment amid the COVID-19 pandemic.

About the Mukhyamantri SHRAMIK Yojna:

i.This scheme will provide provision for unemployment allowance if the local body fails to provide a job within 15 days.

v.Urban workers will be registered and will be provided with job cards similar to the labours of MGNREGS.

i.The scheme is formulated and scheduled to roll out after the approval of the state cabinet through the state urban livelihood mission this scheme will be conducted by the urban development and housing department.

iii.The skill mapping of 2.5 lakh workers done by Jharkhand Rural Development Department has revealed that around 30% of the migrant workers are unskilled labourers.