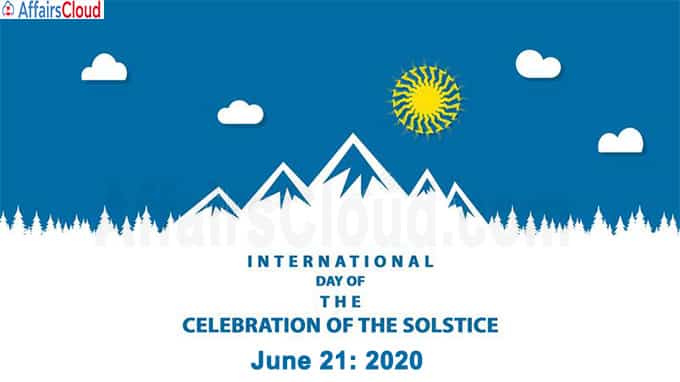 Every year, the United Nations(UNs) International Day of the Celebration of the Solstice is globally observed on 21st June to create awareness about the solstices and equinoxes and their cultural and religious significance.

i.The word solstice is derived from the Latin word “sol” (Sun) and “sistere” (to stand still)

ii.The event of when the sun appears to stand still at the northern or southern hemisphere limit before reversing the direction is known as solstice.

iii.The sun reaches its most northerly or southerly day-arc relative to the equator which results in two solstices occurring annually around June 21(Summer Solstice) and December 21(Winter Solstice).

v.These two events are connected with seasons, harvest and livelihood which is celebrated in various cultures and religions.

The United Nations General Assembly(UNGA) proclaimed the 21st June as the International Day of the Celebration of the Solstices in its resolution A/RES/73/300 on 20th June 2019.

i.To raise awareness about the solstice celebration in different culture like,

ii.To acknowledge the cultural practices and the willingness of diverse people to live in unity to benefit the forthcoming generations.

iii.To recognise the history of the ancient civilizations which understood the relations between nature and humans.