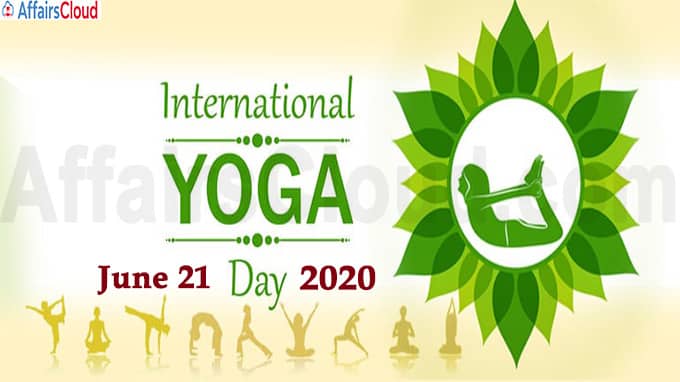 21st June 2020 marks the 6th annual United Nations(UN) International Day of Yoga (IDY) to raise awareness about the benefits of practicing yoga and to educate the public on the importance of choosing a healthy lifestyle to achieve good health. The first IDY was celebrated on 21st June 2015.

ii.The proposal for establishing the IDY was proposed by Prime Minister Narendra Modi in the opening of General Assembly’s 69th session and 175 member states supported the proposal.

i.To encourage the people to practice yoga in their homes with their family, The Ministry of Ayurveda, Yoga & Naturopathy, Unani, Siddha and Homoeopathy (AYUSH), Government of India has maximised the use of social and digital media platforms to assist people in participate in the online events.

ii.The ministry and the yoga institutes focused on the training of Common Yoga Protocol(CYP), streamed the CYP session of social media and Doordarshan for the people to learn the protocol.

iv.Prahlad Singh Patel, The Union Minister of State for Culture & Tourism organised Namaste Yoga campaign from 19th to 21st June and performed Surya Namaskar at Purana Qila and asked the people participate in the online campaign by posting their Surya Namaskar videos on the social media with #10MillionSuryaNamaskar & #NamasteYoga.

i.In this year 2020, the Permanent Mission of India to the United Nations organised the online celebration of the IDY on 19th June 2020 considering the social distancing measures and lockdown situation due to the pandemic.

ii.The UN has offered yoga resources on the Coronavirus portal’s section on Wellness.

i.The word “yoga” is derived from Sanskrit which means to join or to unite symbolising the union of body and consciousness.

ii.In the Global action plan on physical activity 2018-2030, the World Health Organization(WHO) mentions yoga as a way to improve health.