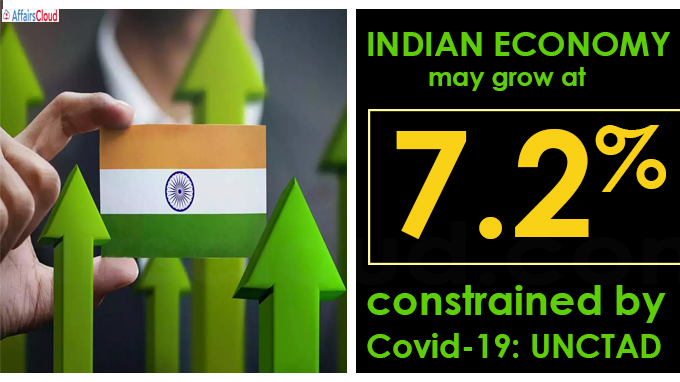 On 15th September 2021, the United Nations Conference on Trade and Development (UNCTAD) released its “Trade and Development Report 2021”, which predicts India’s Gross Domestic Product (GDP) to grow by 7.2 percent in 2021, whereas the Global Growth rate is projected at 5.3 percent.

ii.Global growth rate is estimated at 3.6 percent in 2022, which will match 3.7 percent growth, its pre-pandemic estimation level for 2022.

iv.India’s recovery will be constrained by the 6% inflation rate, which is caused by increasing food prices.

v.The economic activities in the South Aisan region will expand by 5.8 percent in 2021.

In June 2021, the World Bank revised India’s GDP growth forecast for FY22 to 8.3 percent from its earlier estimate of 10.1 percent, and also projected a 7.5 percent GDP growth for India in FY23.