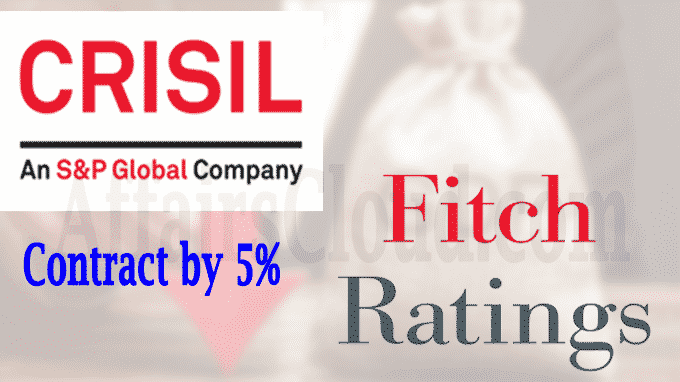 On May 27, 2020 According to Fitch’s Global Economic Outlook(GEO) for May, India’s Gross Domestic Product(GDP) is anticipated to a 5% decline in the current financial year(ending March 2021) from its earlier forecast(late-April’s GEO) of growth of 0.8% due to the pandemic economic activities.This is the biggest forecast cut to India.

i.Fitch predicted 2 consecutive quarters of contraction or negative year-on-year growth in current fiscal (-)2.7% in April-June and (-)12.4% in July-September alternatively comparing to 1.2%  estimated growth in January-March.

Fitch expects China’s general government fiscal deficit to widen to 11.2 % in 2020 from 4.9 %in 2019as. The US has announced an additional fiscal package at more than 2% of its GDP.

Quantitative Easing(QE)- The agency predicts that QE will reach USD 6 trillion in 2020, which is equal to half of the cumulative QE purchased by the Fed, European Central Bank(ECB), Bank of England and Bank of Japan combined in 2009-2018.

Note: The rating agency has warned that the aggressive comeback of coronavirus that necessitates extended or renewed nationwide lockdown will lead to an even worse outcome.

The collapse of the labor market with US unemployment is now expected to rise to 20 % in May and the current social distance will weigh heavily on consumer spending post-crisis, while companies will be more wary of capital spending.

It is a form of unconventional monetary policy in which a central bank purchases long-term securities from the open market to increase money supply and stimulate lending and investment.

The latest report by CRISIL  predicted that the gross domestic product (GDP) of Indian economy will contract by 5% in fiscal 2021. This estimate followed the April 28, 2020 forecast of 1.8% growth, from its earlier forecast of 3.5% growth.

Reason : The key reasons behind this decrease are extension in lockdown, higher economic costs and an economic package.The report also stated that current quarter GDP i.e. Q1FY21 to shrink 25% on-year.

Crisil also forecasted a 10% permanent loss to real GDP over the next three years as it is not possible for Indian economy to move back up to the pre-crisis trend level of GDP.

The assumption for this estimate is average growth of about 7% between fiscals 2022 and 2024.

Note: The Indian economy is facing its fourth recession since independence, which may also be its worst. India has faced a recession thrice in the past 69 years viz. in 1958, 1966 and 1980.

i.Recessions were due to the monsoon that hit agriculture. But now, the pandemic-induced lockdowns have affected most non-agriculture sectors.

The American brokerage expects the Indian economy to contract by 5% in FY21, the worst performance by the country ever. The GDP will contract by 45% in the June quarter as compared to the January-March period on an annualized basis due to the continuing lockdown.