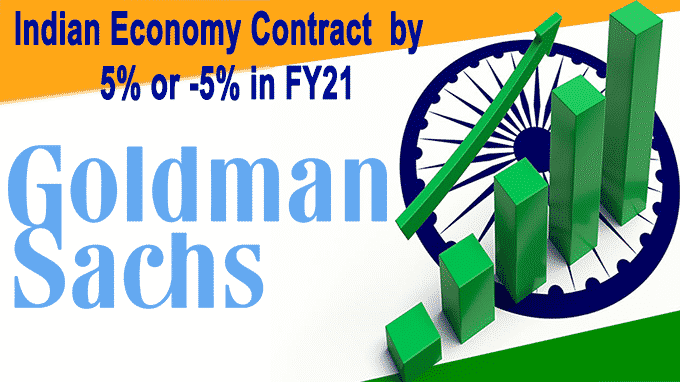 On May 18, 2020 American brokerage Goldman Sachs expects the Indian economy to contract by 5% in FY21 (i.e -5%),  which will be the deepest compared to all recessions India has ever experienced since 1979. It is against its earlier forecast of 0.4% contraction before revising it down to a level it shares with Japanese brokerage Nomura.

i.It expects India’s Gross Domestic Product(GDP) growth will contract by 45%  in the 2nd quarter from the prior three months compared to its previous forecast of a 20% slump.

ii.There will be a strong sequential mechanical rebound in the September quarter(Q3)& expect a 20% annualised gain growth in GDP over the level of June-end. The earlier estimation was of a 10%  gain

iii.Beyond Q3 there will be a gradual recovery, as the targeted policy support continues to be tepid compared to other emerging economies, and far less than most advanced economies

v.Q2 forecasts reflect the extremely poor economic data received by the agency so far for March and April, and the continued lockdown measures, which are among the most stringent across the world

i.The reform measures announced by the government will help growth only over the medium term and are not expected to have any benefit in the near-term/an immediate impact on reviving growth.

ii.The fiscal impact of the stimulus measures announced by the government is very small at 1.3% of GDP.

iii.Slow growth will lead to more stimulus calls from the government, and the aid will be smaller compared to the post-2008 crisis, as well because of the fiscal situation in India.

iv.The agency will continue to monitor its implementation to gauge its effect on the medium-term outlook for the Indian economy.

Other estimated growth projections for Indian economy during 2020-21