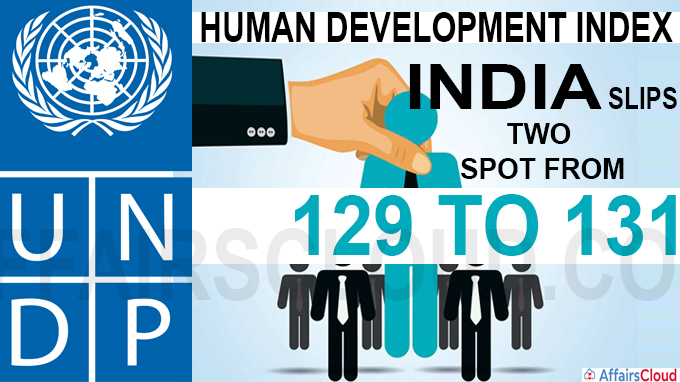 ii.HDI is measured based on 3 criterias which are –  Life Expectancy, Education and Per Capita Income, in the 2020 report ‘Planetary pressures’ a new experimental Index has been introduced.

ii.India’s HDI value of 0.645 puts it into the medium human development category.

iv.India ranked in the top 3 countries for low unemployment rate and high number of seats held by women in local governance.

India’s performance in other Indices:

Cyclone Amphan which hit Bangladesh and India in 2020 caused the biggest displacement. It had triggered 3.3 million pre-emptive evacuations.

i.People who live in Developing countries particularly Asia are most vulnerable to rise in global sea levels.

ii.Prevalence of severe food insecurity is high among women in Africa, Asia and Latin America.

iii.The report stated that if global warming continues without reduction, the number of days in each year with extreme temperatures (below 0 Degree Celsius & above 35 Degree Celsius) will increase by 100 in low human development countries by 2100, if countries follow the Paris Agreement goals, it may increase by only 49%.

ii.On 16th July 2020, The UN’s “The Global Multidimensional Poverty Index(MPI) 2020: Charting pathways out of multidimensional poverty: Achieving the SDGs” states that India records the largest reduction in the number of People living in poverty.