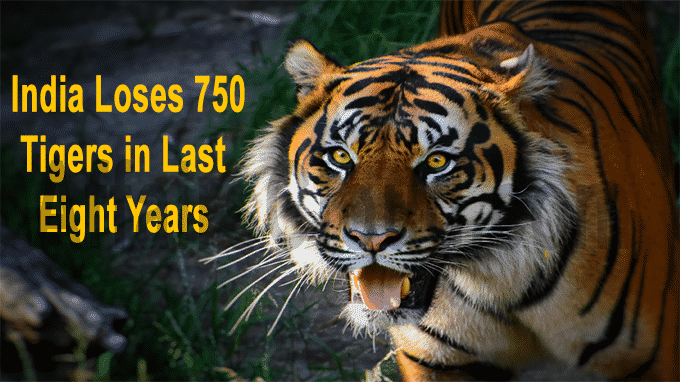 In accordance with the official data provided by National Tiger Conservation Authority (NTCA) as a reply to RTI (right to information) query, 750 tigers have died in the country in the last eight years i.e. between 2012 and 2019 due to poaching and other causes.

-Of the total tiger mortalities, 369 were due to natural causes, 168 due to poaching, 70 deaths are under scrutiny and 42 due to unnatural reasons, including accident or conflicts events.

-There was also seizure of 101 big cats during the eight year period between 2012 and 2019 by different authorities across the country.

–Tiger Deaths State wise: Maharashtra has reported second highest deaths, as it lost 125 big cats during this period followed by 111 in Karnataka, 88 in Uttarakhand, 54 each in Tamil Nadu and Assam, 35 each in Kerala and Uttar Pradesh, 17 in Rajasthan, 11 in Bihar and West Bengal and 10 in Chhattisgarh. 7 each such deaths were reported in Odisha and Andhra Pradesh, 5 in Telangana, 2 each in Delhi and Nagaland, and one each in Andhra Pradesh, Haryana and Gujarat.

Initiative by Indian government to Conserve Tigers: Government of India under its Centrally Sponsored Scheme of Project Tiger being steered by the NTCA has conserved Tigers. There is healthy annual growth rate of tigers at 6%, which offsets natural losses and keeps tigers at the habitats carrying capacity level.

–Tiger poaching state wise: Maharashtra and Karnataka lost 28 tigers each due to poaching, 17 in Assam, 14 in Uttarakhand, 12 in Uttar Pradesh, 11 in Tamil Nadu, six in Kerala and three in Rajasthan, among others.Also, not adequately covered is the fact that 60 percent of tiger deaths in India are not attributable to poaching.

The NTCA was asked to share the details of tiger deaths between 2010 and May 2020. However, it provided data only for the eight years beginning 2012. It also did not provide the details of action taken in these tiger death cases in response to the RTI application.

In December 2019, Environment, Forest and Climate Change Minister Prakash Javadekar announced an increase in tiger population by 750 in the last four years from 2,226 to 2,976.