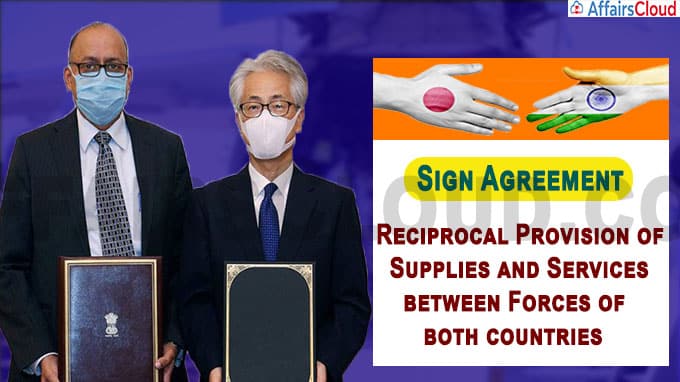 On September 10, 2020, India and Japan signed an Agreement concerning Reciprocal Provision of Supplies and Services or Acquisition and Cross-Servicing Agreement (ACSA) between the Armed Forces of India and the Self-Defense Forces of Japan.

It establishes a framework for closer cooperation between the Armed Forces of India and Japan in bilateral training activities, United Nations Peacekeeping Operations, Humanitarian International Relief and other mutually agreed activities.

The agreement was signed by Defence Secretary Dr Ajay Kumar and Ambassador of Japan Mr Suzuki Satoshi in New Delhi.

The agreement will enhance interoperability between the Armed Forces of India and Japan. It will also increase the bilateral defence engagements under Special Strategic and Global Partnership between two countries.

The Mutual Logistics Pact will ensure a free and open Indo-Pacific region amidst China’s Aggressive Policies.

The Japan Maritime Self Defence Force (JSDF) would be permitted to use India’s military installations in Andaman and Nicobar Islands.

India has similar pacts with the US, Australia, France and will sign one with Russia in later part of 2020.

i.On July 21, 2020 As per the report of Nomura Holdings, Inc, a japanese brokerage firm, India’s Gross domestic Product(GDP) is likely to contract by 6.1%(-6.1%) in FY21 as economic activity continues to be weak due to COVID-19 pandemic.

About Japan:
Capital – Tokyo
Prime Minister – Shinzo Abe (He has announced his retirement on August 28 but will remain in the post until a successor is chosen)
Currency – Japanese Yen