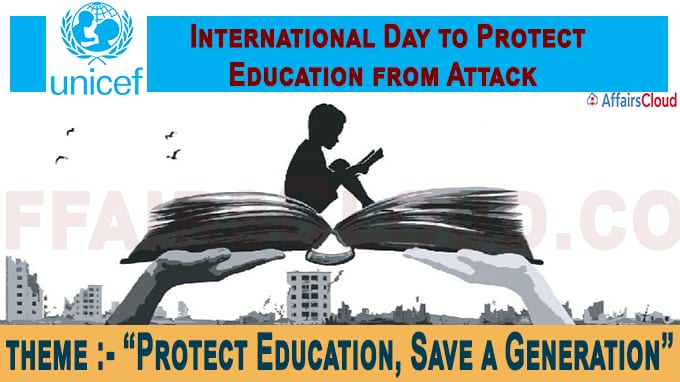 The United Nations'(UN) 1st International Day to Protect Education from Attack is observed on September 9, 2020 to raise awareness about the importance of safeguarding schools as places of protection and safety for educators and students. The day indicates that education is under attack.

Theme for 2020– “Protect Education, Save a Generation.”

Reason Behind the Theme

Attacks on the children around the world are continuing constantly, as the warring parties defy one of the basic rules of war, i.e., the protection of children.

The continued nature of conflicts is greatly affecting the futures of entire generations of children.

Significance of the Day

i.The day also highlights the need to keep education at the top of the public agenda. This remains as a top preference, while governments continue to fight with the COVID-19 pandemic, which has led to school closures for more than 90% of the world’s student population.

ii.The day captures the attention of the condition of more than 75 million 3-to-18-year-olds, who are living in 35 countries affected by the crisis and their immediate need for educational assistance.

iii.The resolution was presented by the State of Qatar and co-sponsored by 62 countries.

iv.The annual observance of the Day will be facilitated by UNESCO and UNICEF in collaboration with partners within and outside the UN system

As per the report Education under Attack 2020, published by Global Coalition to Protect Education from Attack (GCPEA), there are more than 11,000 reported attacks on education or military use of educational facilities globally between 2015 and 2019.

As per the new report by Save the Children, pandemic may force at least 9.7 million children out of school forever by the end of this year(2020).