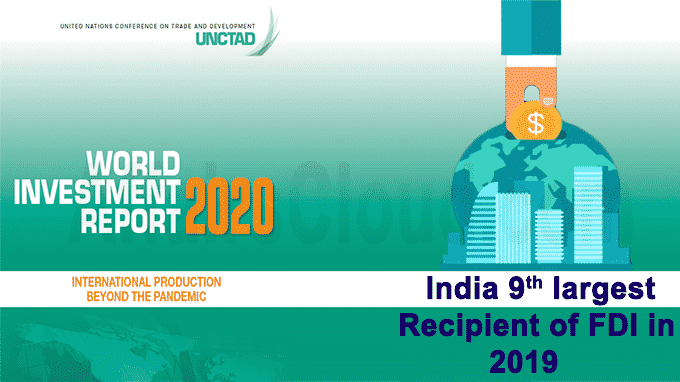 In accordance with the “World Investment Report 2020” by United Nation’s (UN) trade body, the UN Conference on Trade and Development (UNCTAD), India has become the 9th largest recipient of foreign direct investment (FDI) in 2019 after receiving $51 billion last year.

-The number of greenfield investment announcements declined by 4% in the first quarter, and Merger & Acquisitions (M&A) contracted by 58.

-Investors concluded deals worth over $650 million in the first quarter of 2020, mostly in the digital sector in India.

-There is lower but positive economic growth in India in the post-COVID19 pandemic period and the country’s large market will continue to attract market-seeking investments.

FDI flows to South Asia increased by 10% to $57 billion in 2019, the growth driven largely by a rise in investment in India. However, FDI is expected to contract sharply in 2020.

-Outward FDI flows from Asia declined by 19% to $328 billion due to a 52% drop in Mergers and acquisitions (M&A) purchases by Asian companies in 2019.

-Outflows from South Asia grew 6%, driven by investment from India. Companies in India are the sub region’s largest investors, with more than 90% of outflows in 2019.

It has been published annually since 1991 focusing on trends FDI worldwide, at the regional and country levels and emerging measures to improve its contribution to development.