On April 29, 2020, India Meteorological Department (IMD), an agency of the Ministry of Earth Sciences of the Government of India (GoI), has released a detailed list containing 169 names of upcoming tropical cyclones that are likely to occur over the north Indian Ocean (NIO) including the Bay of Bengal (BoB) and the Arabian Sea (AS). 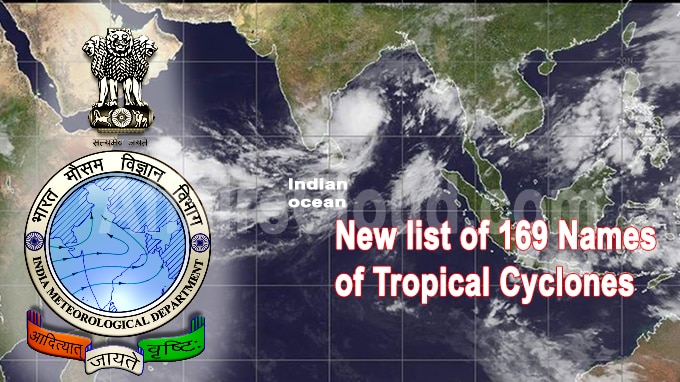 iii.The fresh list was tabled during the 45th session of WMO/ESCAP hosted by Oman in September 2018.

iv.The new list will become easier to issue warnings for these storms and spread awareness & remove confusion in case of simultaneous occurrence of tropical cyclones over a region. Also, in the time of disaster in the country, it will be able to contact each other better.

The full list can be found in the link below,
https://mausam.imd.gov.in/backend/assets/press_release_pdf/Press_Release_Names_of_Tropical_Cyclones_28042020.pdf

About India Meteorological Department (IMD):
Headquarters– New Delhi
Director General– Dr. Mrutyunjay Mohapatra
It is one of the 6 Regional Specialised Meteorological Centres (RSMCs) established across the world, along with 5 regional Tropical Cyclone Warning Centres (TCWCs) that entrusted to issue advisories and names of tropical cyclones.