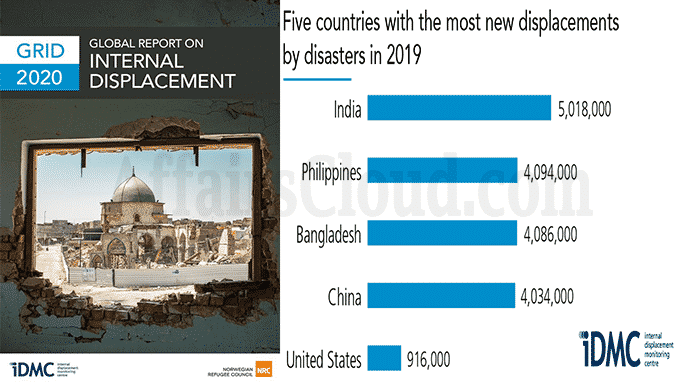 ii.Conflict and violence triggered 8.5 mn new displacements in 50 countries in 2019,  the majority of which were by armed conflict and in low- and middle-income countries.

iii.Nearly 1,900 disasters triggered 24.9 mn new displacements across 140 countries and territories in 2019. This is the highest figure recorded since 2012 and is 3 times the number of displacements caused by conflict and violence. Out of these, about 95% took place due to weather hazards like storms and floods.

Gist about India in the report

i.Nearly 22% of the country’s population live below the national poverty line, 2019 was the seventh warmest year since 1901 in India & monsoon was the wettest in 25 years.

ii.The northwest monsoon unleashed displacement along with cyclone Maha, which hit Kerala and the Lakshadweep Islands. This was followed by Cyclone Bulbul, which struck Odisha and West Bengal, triggering 186,000 displacements.

iii.Displacement due to natural disasters, over 19,000 conflicts and violence also prompted the phenomenon. Political and electoral violence, especially in Tripura and West Bengal, led to the displacement of more than 7,600 people.

iv.Unrests and communal violence triggered displacement in the second half of the year.

Reason– The displacements were a result of a combination of increasing hazard intensity, high population exposure and high levels of social and economic vulnerability.

Solutions can be found out by the following

About GRID 2020:
It is a  global reference for internal displacement data and analysis and is widely used by policy-makers, national governments, United Nations(UN) agencies, international Non-Government Organisations(NGOs), journalists and academics.

About IDMC:
It is the world’s authoritative source of data and analysis on internal displacement. It has been a  part of the Norwegian Refugee Council (NRC) since its establishment in 1998.
Headquarters– Geneva, Switzerland
Director– Alexandra Bilak