On April 30, 2020, A book titled “The Room Where It Happened: A White House Memoir” authored by John Bolton. The date of the book release has been pushed back from May 12, 2020 to June 23, 2020, on Amazon.com and Barnes & Noble bookseller company. The book was published by an American publishing company Simon & Schuster. 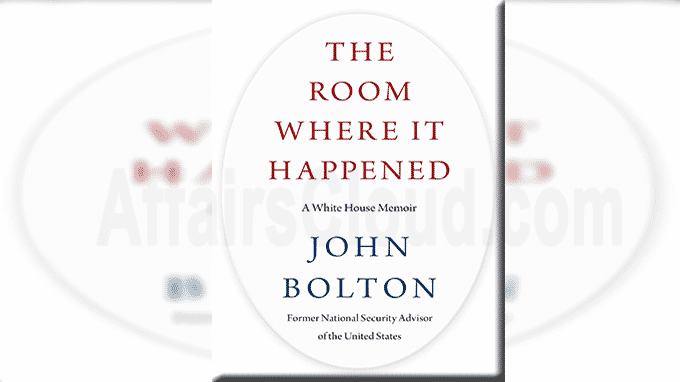 i.About the book: The interest in the book and its anticipated criticism of President Trump’s actions on Ukraine, peaked during the Senate impeachment trial in 2019, had reached the top 20 on Amazon’s bestseller list.

ii.Bolton reportedly describes an August conversation that when he left the White House on acrimonious terms, Trump told him that he wanted to withhold hundreds of millions of dollars in security aid from Ukraine until it helped him with investigations into political rival Joe Biden.

iii.The Associated Press reported in November that Bolton’s book deal was worth $2 million

iv.The actual date of the book release was scheduled in March 2020 but was postponed to May due to the pending government security review. The pages of the book have apparently grown longer from 528 to 576 pages.

v.About John Bolton: John Bolton was the former National Security Advisor to President Donald Trump. He served as the United States Ambassador to the United Nations from 2005 to 2006.

vi.He has spent many years of his career in public service and held high-level positions in the Administrations of Presidents Ronald Reagan, George H. W. Bush, and George W. Bush.