On February 14, 2020, the International Institute for Strategic Studies (IISS) annual “Military Balance” report states that global spending on defence hiked by 4% percent in 2019, showing largest growth in 10 years (2010-2019). The report showed top 15 countries, among them, the world’s biggest defence spenders are United States (US), China, Saudi Arabia, Russia and India. 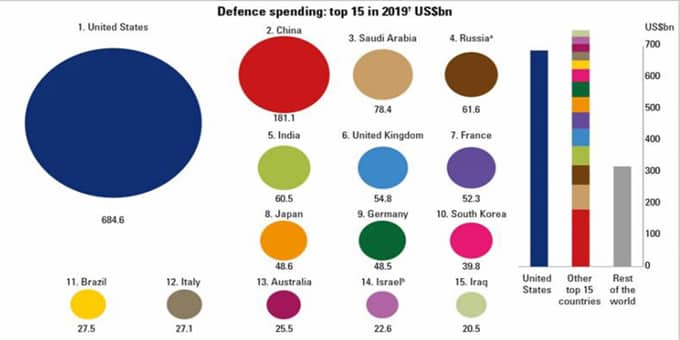 i.The increase in US spending alone from 2018 to 2019 is USD 53.4 billion which is around Britain’s entire defence budget.

ii.There is 6.6% increase in China and the US defence spendings while Europe’s spendings hike by 4.2%.

iii.As per report, US is constantly complaining that the NATO (North Atlantic Treaty Organization) members are not contributing enough towards Defence spending in accordance with NATO pledge which directs that the member nation should contribute 2% of its GDP (Gross Domestic Product) to Defence.

About IISS:
It is an international research institute that provides objective information on military, geopolitical and geo-economic developments of 173 countries.
Director-General and Chief Executive– Dr John Chipman
Headquarters– London, England