Our reader Vikash shared interview experience that he had during IBPS PO Interview Experience. You can learn from his experience and find a way for yourself as well in the upcoming days.

After completing the formalities of document verification, my term came at around 12 o’clock.

After knocking at the door, I took permission to come inside then wished them a very cosy good morning. All noded their head in affirmation and signalled to sit down.

There were four gentlemen and one lady in the panel.

M1: Where are you from?
Me: I told it properly

M1: So Mr. Vikash, you are from science background?
Me: Yes sir, you are dead right, but after BSc Zoology (Hons), I did PGDM in Marketing and HRM then went on to complete PG Diploma in English Journalism from Indian Institute of Mass Communication, New Delhi, in 2013.

M2: What have you been doing since then?
Me: I worked for DD News and The Times of India but it was my predilection to enter in public sector bank that really egged me to resign from there and try for bank. ( I have been seriously indulged in the preparation of UPSC, but I didn’t tell them because it might have given wrong impression about my longevity in the banking sector) 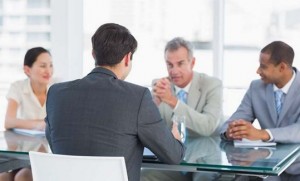 M3: What you father does?
Me: He is a retired Teacher.

M1: What is Priority Sector?
Me: told them properly.

M1: What are the different percentage of lending being fixed for different banks in Priority Sector?
Me: I had some idea but could not recall properly so without doing any guess work I said sorry.

M2: What is Mudra Financing?
Me: I said, MUDRA stands for Micro Units Developments and Refinance Agency. It was incorporated by Mr. Narendra Modi to cater Micro and Small enterprises who are deprived of financial succor from mainstream banks. For facilitating it, MUDRA bank was established in 2015 which is a subsidiary of SIDBI.

M1: Is it loan amount or the production of firms?
Me: I said it is the bracket of loan amount which is given to enterprises.

M4: What is Bank?
Me: Bank is a financial institution which accepts deposits owned by an individual or entity and lend it out in order to earn profit.

M3: (Interupts), what do you mean public sector banks are not into generation of profit?
Me: Public sector banks, which have more than 51% share of Government of India play a pivotal role in social development apart from profit making it means they have a bigger role to play in India’s inclusive development.
For example- As per data released by Ministry of Finance on January 25, 2017, 26 crore bank accounts got opened through PMJDY- Scheme in which the contribution of private sector bank is just 0.90 crore which shows the importance of public sector banks in achieving financial inclusion.

M1: Who is Arnab Goswami?
Me: I smiled and said sir, one day he took my interview then said, he is a renowned journalist who worked for Times Now but recently, he resigned and floated a new channel named Republic but later on the name has been changed to Republic TV due to the opposition of Mr Subhramanium Swami because the word Republic got clashed with term term Republic of India.( I saw M1 searching something on his mobile after asking, you said his channel name is Republic TV, I said yes. I think I wanted to find out the name of the channel)

F1: Who coined this term?
Me: I had no idea so I said sorry confidently.

Overall, I was satisfied with my effort. There were no questions asked on Budget, Demonetisation, Monetary Policy or general questions like why banking, why should we hire you, what are the prerequisites of PO etc.

Panel was very professional and I hardly found any expression on their face. Nevertheless, I did whatever I could.

THANK YOU Vikash for sharing your Interview Experience with us