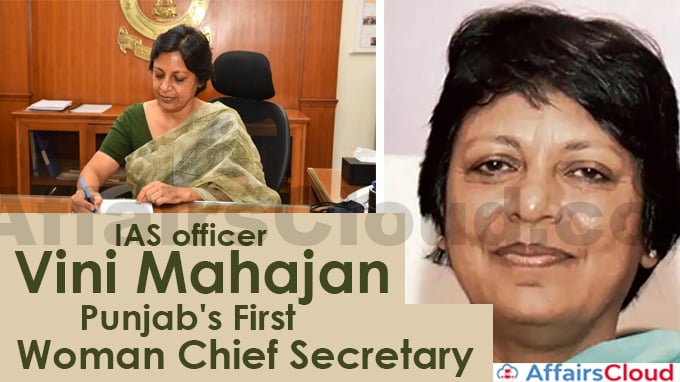 On June 26, 2020 The Punjab government appointed 1987 batch Indian Administrative Service(IAS)  Officer Vini Mahajan as the Chief Secretary, after which she becomes the 1st woman to hold this post. She will remain in the post until October 2024. She succeeded Karan Avtar Singh, who was due to retire in August 2020.

Vini Mahajan has a total of 33 years experience in Central and Punjab governments.

i.Vini Mahajan prior to this appointment was serving as Additional Chief Secretary, Investment Promotion,  and Governance Reforms and Public Grievances.

ii.She has worked in the office of the former Prime Minister Manmohan Singh from 2005-2012 and handled matters related to Finance, Industry and Commerce, Telecom and information technology(IT).

iv.She became the 1st woman officer to be posted as Deputy Commissioner(DC) in Punjab in 1995, where she took charge as DC in Ropar & served as the 1st Director Disinvestment.

v.She was part of the central government’s core team which binded India’s domestic response, during and after the 2008 global financial crisis.

Participation- She has also participated in the global response through the G-20 mechanism.