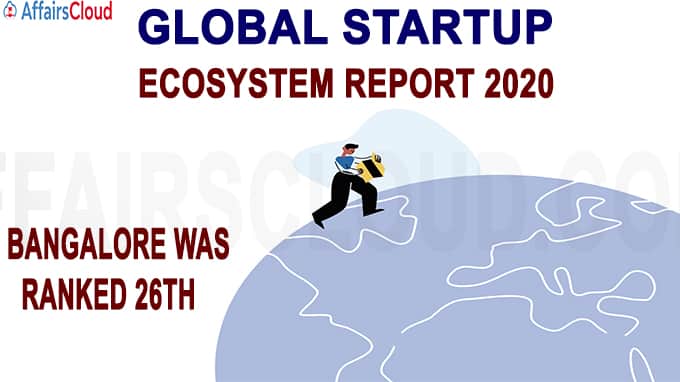 On June 25, 2020, According to the report, ‘Global Startup Ecosystem Report (GSER) 2020; the New Normal for the Global Startup Economy and the Impact of COVID-19’ released by Startup Genome, Bangalore, popularly known as the startup capital of India, has added another milestone as it become the only city in the country to be included in the world’s top-30 startup ecosystem ranking & placed 26th position. At the same time, the nation’s capital Delhi has been ranked 36th in the list.
While California’s Silicon Valley topped the list, which ranks the top ecosystems by a number of metrics including performance, funding, connectedness, talent and knowledge.

As per the report, Startup companies in Bangalore city get good facilities and financial activities like Paris and Singapore.
While, Delhi ranked well for the volume and complexity of patent creation in the analysis.

ii.Due to the coronavirus (COVID-19) epidemic, startup firms have found themselves in a stock of shockwaves including capital shock and demand.
Around 72% of startups witnessed their revenue drop since the beginning of the crisis, with the average startup facing a decline of 32%.

Mumbai ranked first in  a parallel “100 emerging ecosystem rankings 2020” followed by Jakarta, Zurich.
Other Indian cities that made it to the list include Hyderabad, Chennai and Pune.

Here’s the list of top 3 cities in Emerging Ecosystem Ranking:

About the ranking:
Startup Genome collected data and information from Google Trends, GitHub and Meetup & also considered the impact of coronavirus crisis on startups and public policy actions taken by governments to support startup ecosystems.