Prime Minister of India Shri Narendra Modi inaugurated the 107th edition of the Indian Science Congress (ISC) also known as ISC 2020 at the University of Agricultural Sciences (UAS) in Bengaluru, Karnataka. The theme of ISC for the year 2020 was “Science and Technology: Rural Development”.

Objective: The main objective of the summit was to bridge the gap between farmers and tech-developers. The key highlights of the event are as follows: 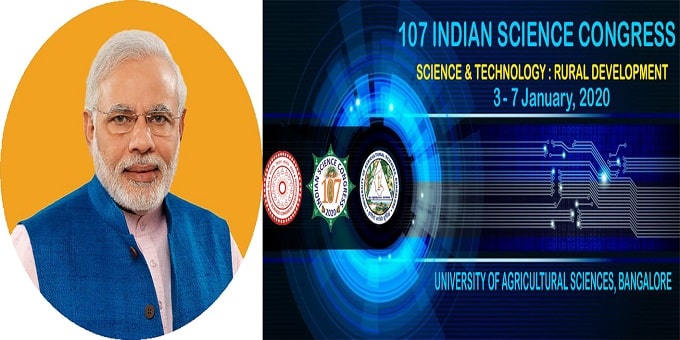 ii.Participants: The science congress was a 5-day event held from January 3-7, 2020 in which Nobel Laureates, dignitaries and students from across the country and the world over participated.

iii.Editions held in Bengaluru: This is the 3rd time Bengaluru hosts ISC after 1987 and 2002. It is also the 4th time Karnataka hosts such event after organising ISC lastly in 2016 in Mysuru.

iv.Members present: Vice President of India Shri Muppavarapu Venkaiah Naidu and other officials were present during the event.

i.The Defence Research and Development Organization (DRDO) participated in the “Pride of India- Science Expo- 2020” at the 107th ISC.

ii.The DRDO pavilion was inaugurated by the Union Minister of Science and Technology(MoST) Dr Harsh Vardhan.

iii.Exhibits: 31 DRDO laboratories with more than 150 exhibits and models participated in the expo exhibiting the ‘Make in India’ spirit.

iv.DRDO: It is the R&D (Research and Development) wing of the Ministry of Defence (MoD), having more than 52 laboratories and establishments. They are mainly engaged in developing weapon systems, platforms and equipment for the Armed Forces.

ii.Members present: Union minister of state(Mos) for Agriculture and Farmers Welfare, Kailash Choudhury and Karnataka Deputy Chief Minister Laxman Sangappa Savadi and other officials were present in the event.