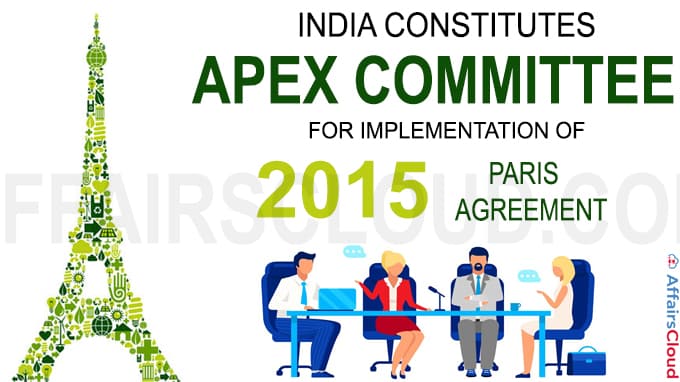 On November 27, 2020, the Government of India (GoI) has constituted a 17 members committee namely “Apex Committee for Implementation of Paris Agreement (AIPA)” under the chairperson of secretary, Union Ministry of Environment, Forest and Climate Change (MoEFCC)(Presently – Mr.Rameshwar Prasad Gupta).

The committee will be responsible of formulating policies and programmes for the execution of Nationally Determined Contributions (NDCs) prepared by India under Paris Agreement 2015.

To ensure coordinated response on climate change matters in order to keep India on track towards meeting its climate change obligations under the Paris Agreement.

–AIPA needs to report and communicate the NDCs to the United Nations Framework Convention on Climate Change (UNFCCC).

–It will also define the responsibility of different government Ministries to achieve the climate change mitigation and adaptation goals.

What are Nationally Determined Contributions (NDCs)?

The Paris Agreement (Article 4, paragraph 2) mandated each of its countries to prepare, communicate and maintain post-2020 climate actions to reduce greenhouse gas emissions and mitigate the impacts of anthropogenic climate change. These are known as nationally determined contributions (NDCs).

Signed in 2016, it is an agreement within the United Nations Framework Convention on Climate Change (UNFCCC). It was negotiated in 2015 by representatives of 196 state parties at the 21st Conference of the Parties of the UNFCCC in Le Bourget, near Paris, France.

i.On October 15, 2020 The Ministry of Environment, Forest and Climate Change announced that Ramsar Convention has declared The Asan Conservation Reserve (ACR) in Dehradun as a site of international importance. This is the first wetland from Uttarakhand, to be recognised by Ramsar.

ii.On the occasion of International Coastal Cleanup Day 2020 (September 19, 2020) MoEFCC launched India’s own eco-label BEAMS (Beach Environment & Aesthetics Management Services) with an aim to reduce pollution and to maintain high standards of cleanliness, safety for beachgoers in accordance with coastal environment and regulations.