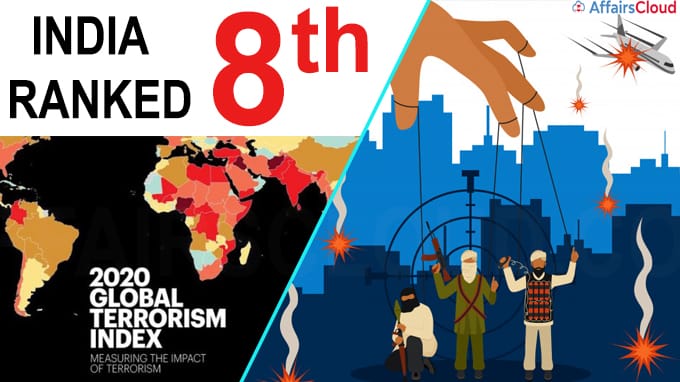 ii.GTI is a complete analysis of impact of terrorism for 163 countries covering 99.7% of the World’s Population.

Countries Most Affected by Terrorism:

ii.According to report, Maoists, the Communist Party of India (Maoist) and Jaish-e-Mohammad (JeM) were responsible for over Two Thirds & half of the total attacks in India in 2019.

iii.Jammu and Kashmir was the most affected Region due to terrorism, it reported 165 attacks and 103 deaths. The Three most active groups in Kashmir were Jaish-e-Mohammad (JeM), Hizbul Mujahideen & Lashkar-e-Taiba (LeT)

iv.Chhattisgarh was the second most affected Region in India with 85 attacks and 53 deaths all from Maoist Extremists.

v.India recorded Lowest Number of deaths due to terrorism among the Top 10 countries affected by Terrorism. It also has the lowest lethality rate of attacks (0.5 deaths per attack).

The Suicide Attack carried on the Central Reserve Police Force (CRPF) in Lethpora, Pulwama by HeM was listed in the report among the 20 Most Fatal Terrorist Attacks in 2019.

i.Deaths due to Terrorism have fallen for the 5th Consecutive year in 2019 (13, 286 deaths). Russia, Eurasia, South America & South Asia recorded a fall of atleast 20 % in deaths due to terrorism.

ii.National Anti-Terrorism Day is observed every year on May 21 in order to raise awareness amongst people that terrorism has no religion, also to spread the message of peace, harmony, and brotherhood.