On September 13,2017, the centre announced that will soon grant citizenship to nearly one lakh Chakma Buddhists and Hajong Hindu refugees, who came from the erstwhile East Pakistan(Bangladesh) five decades ago and are living in camps in the northeast.This announcement came on the situation when centre is planning to deport Rohingya people to Myanmar. 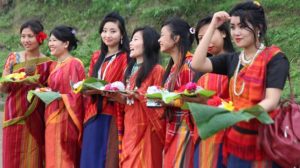 Who are Chakmas and hajongs?
i.Chakmas and hajongs are native people of Bangladesh. They fled to India in the 1960s to escape religious persecution in Chittagong Hill area of Bangladesh and Kaptai dam project.
ii.The Chakmas, who are Buddhists, and the Hajongs, who are Hindus,  came to India through the then Lushai Hills district of Assam (now in Mizoram). Later, Union Government had shifted majority of them to Arunachal Pradesh.

The decision’s significance: –
In 2015, Supreme court asked the union to confer citizenship status to them ,Later Arunachal  Pradesh moved the apex court against its order.Supreme court turned down its plea ,now Union Minister of State for Home Kiren Rijiju said, “Supreme Court order has to be honoured.Chakmas are settled in Arunachal Pradesh since 1964. But Scheduled Tribe status and indigenous people’s right won’t be diluted. This statement signifies that they will be granted citizenship status soon.

Arunachal Pradesh’s stand on this decision:-
i.  Arunachal Pradesh government had earlier opposed the move and had said it would change the demography of the State.
ii. Their stand is that this decision may end up in creating ethnic violence in that region due to resource distribution, employment , education etc. But a senior Home Ministry official said they would be granted citizenship but will not have any land ownership rights in Arunachal Pradesh, which is predominantly a tribal State. This statement is a solace to the people of Arunachal.