On July 22, 2017, Union Minister of State for Home Kiren Rijiju inaugurated the Research Institution of World Ancient, Traditional, Culture & Heritage (RIWATCH) Museum at Roing in Arunachal Pradesh and hoped that it would serve as a place of exchange of cultural values of various tribes of the state and the North East.

RIWATCH is located in Roing, Lower Dibang Valley, Arunachal Pradesh, under the auspices of International Center of Cultural Studies(ICCS) USA. 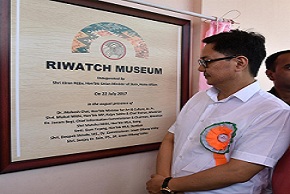