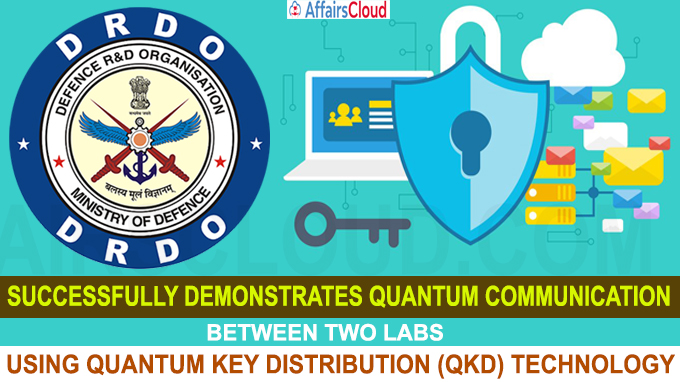 ii.Quantum based communication will enable secure transfer of encryption keys, which are vital in the modern digital world.

iii.This Quantum works being executed by DRDO will be used to help start-ups and Small & Medium size Enterprises working in the domain of Quantum Information Technologies.

i.The security against eavesdropping was tested for the system at over 12 km range and 10 Decibel Attenuation (loss of transmission signal strength) in Fibre optical Channel.

iii.In QKD technology, encryption keys will be sent as qubits via fibre optic cables. Qubits or Quantum bits are fundamental building blocks for Quantum Information processes, they are similar to Bits (0’s & 1’s) in classical computing.

iv.If any third party tries to read the Encryption Key Transmission, QKD technology will disturb the qubits and generate transmission errors which will immediately inform the legitimate end users.

v.The Quantum Communication was done using the Time-bin QKD scheme under realistic conditions. Time-bin encoding is used to encode qubit on a photon.

i.Quantum computers are machines which use properties of Quantum physics such as superposition & Quantum entanglement to store data and perform computations. Qubits are basic units of a quantum computer, similar to 0s and 1s in classical computers.

ii.Qubits are made using physical systems like spin of an electron or orientation of a photon.

ii.They will be used for applications in the field of aero-space engineering, numerical weather prediction, simulation, securing communication and financial transactions, cyber-security and advanced manufacturing.