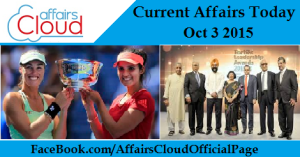 Non – Binding Memorandum of Understanding has been signed between Adani Ports and Special Economic Zone (APSEZ) and Larsen & Toubro (L&T) to supervise the operations of Kattupalli Port in Tamil Nadu.

According to MoU Adani will be responsible for EBIDTA (Earnings before Interest, Taxes, Depreciation and Amortization)gains and losses arising from the port operation.

To promote Khadi in the young generation Gujarat Government has launched a special Khadi Utsav in Ahmedabad on the 146thbirth anniversary of Gandhiji.

Anurag Bhushan, Consulate General of India in Dubai has launched SOS mobile app named “CGI Dubai” on the birth anniversary of Mahatma Gandhi which is developed on the sidelines of PM Modi Digital India Initiative.

Awareness camps will be provided by IWRC to promote the app among the workers.

On the first anniversary of Swachh Bharat Abhiyan Maharashtra Government appointed three women as “Swachhata Doots” or “cleanliness ambassadors” from the state’s rural areas who have showed commitment towards sanitation needs including building of toilets.

It is part of Maharashtra’s target of building 56 lakh toilets in next five years.

In a move to expand strategic and defence ties the two nations are conducting an inagural maritime -exercise from 17-18 Oct 15 in the Andaman Sea along with the 26th edition of the CORPAT (Coordinated Patrolling) which is scheduled from 03 Oct to 21 Oct 15.

One warship and one Maritime Patrol Aircraft from both sides

North Atlantic Treaty Organization (NATO) has launched largest exercise “Trident Juncture” since 2002 with troops from 30 states, including non-NATO in Italy, Spain and Portugal.

Purpose of the exercise is to train and test the capabilities of NATO Response Force (NRF) and to make extreme ready and technologically advanced multinational force made up of land, air, maritime.

36,000 troops, more than 60 warships and 200 aircraft will participate in the drills which makes it the biggest after NATOs“Strong Resolve” military exercise in 2002 when around 40,000 troops took part.

In mVisa the payment will be initiated by the customer who enters the details which reduces the chances of fraud.

Born on 29 September 1934 former Australian Test player Lindsay Francis Kline has died at the age of 81. He was recalled for facing the last ball of his first Test match in 1960 between Australia and the West Indies.