PM Modi flag off state-of- the-art Hamsafar train from Kushinagar, UP
♦ Prime Minister Narendra Modi flagged off the Humsafar train between Gorakhpur and Delhi`s Anand Vihar terminus from Kushinagar in Uttar Pradesh on November 27, 2016.This train will run between this two station thrice in a week.
Features of Hamsafar train :
i. Humsafar train will have several new features, including LED screen display, vending machines for tea, coffee and milk, hot, refrigerated pantry and ports for charging electronic devices such as mobiles and laptops. 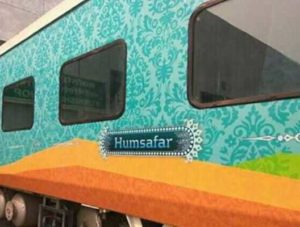 ii. Besides CCTV, GPS-based passenger information system, fire and smoke detection and suppression system with every berth are some of the features on Humsafar trains.
iii. However, the fare in the Humsafar train would be 20 percent more than the normal trains.
iv. Railway Minister Suresh Prabhu had announced during the presentation of Rail Budget 2016-17 that there will be seven Humsafar Express trains for inter-city overnight journey.

Government of Jharkhand Introduced Bill Against Placement Agencies
♦ The Government of Jharkhand headed by Chief Minister Raghubar Das has introduced a bill named ‘Jharkhand Nizi Niyozan Abhikaran and Gharelu Kamgar (viniyam) vidheyak 2016 (Jharkhand private employment agency and domestic employee bill) against placement agencies to control those agencies from exploiting people in the name of giving employment outside the state.
♦ Aim: to abolish human trafficking from Jharkhand and stop placement agencies from exploiting the job seekers.
Rules of new Bill
i. Placement Agencies (both, existing before notification as well as new agencies yet to start) are required to take license or registration certificate of the agency within 90 days of the notification of the act.
ii. Any placement agency without registration or license or involved in illegal human trafficking, would be sentenced to two years to jail or fined Rs 1 lakh or both.
iii. Those who violate rules under the act or disobey the conditions of registration proof certificate would get one year jail and Rs 20,000 fine or both.
iv. The placement agency cannot take money from the domestic workers and make available employment details and employment registration certificate within a week.The agencies cannot employ people below the age of 18 year
iv. It should keep the details of every employee with proper regulation of minimum wage, eight hours duty and double the wage on doing overtime and leave as per the rule.
v. The placement agency should also ensure the wages are deposited in the bank account of the employee.

Indian Railways, IRCTC include transgender as third gender
i. Indian Railways and IRCTC have included “transgender as third gender” in the option alongside male and female in ticket reservation and cancellation forms both online and offline
ii. The Delhi-based lawyer had made the representation after the Delhi high court in February had asked him to approach the Railway Ministry while disposing of his petition.
iii. The Railway ministry notify that hijras, eunuchs, apart from binary gender to be treated as third gender for the purpose of safeguarding their rights under Part III of our Constitution and the laws made by the parliament and the State Legislature.
IRCTC:
♦ Indian Railway Catering and Tourism Corporation, is a subsidiary of the Indian Railways that handles the catering, tourism and online ticketing operations of the Indian railways.
♦ Headquarters: New Delhi
♦ Established: 1999

RBI introduces incremental CRR to manage excess liquidity
i. The Reserve Bank of India increasing the Cash Reserve Requirement (CRR) for incremental deposits between September 16 and November 11 to 100% while the current CRR is 4%, effective from November 25, 2016.
ii. The RBI move will require all excess deposits that banks in India are getting — estimated to be about Rs 3.25 lakh crore by Friday —
iii. Because of the demonetisation move, excess deposits amount collected in banks was nearly  Rs 3.25 lakh crore
iv. This deposit amount is kept with the central bank, only the depositors can get 4% interest.
Cash Reserve Requirement (CRR) :
♦ Cash Reserve Ratio (CRR) is a specified minimum fraction of the total deposits of customers, which commercial banks have to hold as reserves either in cash or as deposits with the central bank. 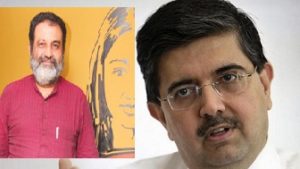 Ola Partners SBI, PNB for setting up Mobile ATM
i. India’s largest ride-hailing service Ola cabs has tied up with lenders like State Bank of India (SBI) and Punjab National Bank (PNB)to set up mobile ATM in the cab to help people withdraw cash easily.
ii. Ola will first introduce the service on test basis in its cab in Kolkata and Hyderabad where the taxis with POS machine and a bank officer will be parked at different locations and an amount of Rs. 2,000 can be withdrawn per card.
iii. In Kolkata, Ola has partnered with Punjab National Bank (PNB), while in Hyderabad, it has collaborated with SBI and Andhra Bank.
iv. In Kolkata the cabs will visit areas like Chandni Chowk Metro Station, Esplanade Metro, Barabazaar, Salt Lake, Exide and Rashbehari. While in Hyderabad the service is available at places like KBR Park, JNTU, Inorbit Mall.
v. The already running experimental service is started for a week and will continue till
vi. Ola Chief Operating Officer Pranay Jivrajka said that the company aims to expand the service to other cities such as Delhi with cash being dispensed while the cab is in motion rather than current experiment of cars being parked at a particular busy point.

Centrum Direct launched CentrumPay payment Solution to Help Foreigners from Cash Crunch
i. Due to the demonetization move of the government, the foreign exchange outlets at the airport are facing cash shortage which in turn is causing inconvenience to the foreign travelers in and out of the country.
ii. According to the latest directive from the Reserve Bank of India (RBI) on November 25, 2016, foreigners can exchange foreign currency for Indian notes up to a limit of Rs 5,000 per week till December 15 after submitting a self-declaration that they have not availed the facility during the week.
iii. To provide some relief to the foreign tourists, the Forex player Centrum Direct has launched CentrumPay which is a unique mobile wallet which also offers a physical card to withdraw money from any ATM or POS.
iv. Centrum Direct which is the forex arm of the city-based leading financial services company Centrum Group, deal in Foreign Exchange & Money Transfer services.
Features of CentrumPay
♦ Foreign tourists will have an alternate channel for making payments as well as avail legal tenders for their forex.The mobile wallet and physical card are combined into a single digital payments solution. MasterCard will issue the cards while Yes Bank will issue the PIN issuer.
♦ Can be used as a virtual mobile wallet for any type of payments for online shopping, taxis, payments at hotels, etc using the QR code or to withdraw cash at any merchant PoS/ATMs which accept MasterCard products as per the permissible limits.
♦ An Indian user can load up to Rs 1 lakh a month, a foreigner can load up to Rs 2 lakh in the walet. Since the card is not linked to any bank account it can be refilled through debit/credit cards or online banking facility of the customer any number of times for a period of five years.
♦ Centrum Direct will charge a flat Rs 150 for a card from both foreigners as well as domestic customers. 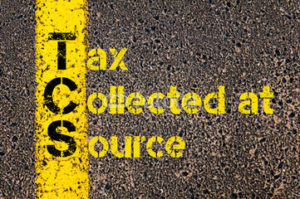 ii. The new model GST law provides for 1 per cent TCS and 1 per cent tax levied on inter-state movement of goods. It will not apply to aggregators like Ola,Uber etc.
iii. If consumer return of goods , the companies will not have to deduct TCS as there is no actual sale.
TCS(Tax Collected at Source):
♦Tax Collected at Source (TCS) is income tax collected by seller in India from payer on sale of certain items. It is provided in section 206C of Income Tax Act 1961.
♦ The seller has to collect tax at specified rates from the payer who has purchased the items like Alcoholic liquor for human consumption. 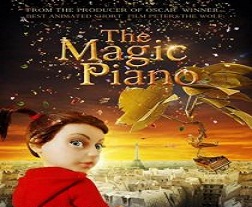 General Qamar Javed Bajwa appointed as new Pakistan Army chief
i. Lt Gen Qamar Bajwa has been appointed as the chief of Pakistan Army by the Prime Minister Nawaz Sharif. He will replace Gen Raheel Sharif who will retire on November 29, 2016.
ii. Lt Gen Zubair Hayat also appointed as the next chairman of the joint chiefs of staff committee.
iii. Bajwa is currently serving at the GHQ as Inspector General of Training and Evaluation.He headed the Pakistan Army’s largest formation Rawalpindi-based X Corps which is responsible for LoC operations.He has served in Congo with the United Nations.
Pakistan Army :
♦ The Pakistani army is the sixth largest in the world in terms of active military personnel and the largest among Muslim countries.
♦  Pakistan has given the largest number of troops for the UN peacekeeping mission which gives Pakistan an eminent position among rest of the nations.

NASA to work with UAE on Mars probe
i. US space agency NASA will work with the United Arab Emirates (UAE) Space Agency Mars 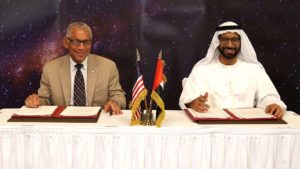 Hope spacecraft  which will reach the Mars in 2021 under an “umbrella agreement” said by Dr Gale Allen, NASA’s Deputy Chief Scientist on November 27, 2016.
ii. The Hope spacecraft will travel more than 60 million km in its nine-month journey, coinciding with the UAE’s 50th anniversary in 2021.
iii. The mission will be supervised by the UAE Space Agency and developed by Mohammad Bin Rashid Space Centre (MBRSC), with support from international partners. 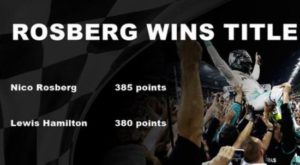 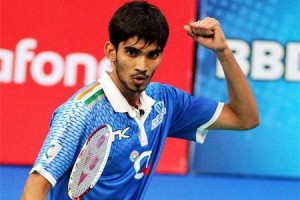 Marathi Litterateur Anand Yadav Passes Away
i. Noted Marathi author Anand Yadav passed away in Pune on November 27, 2016. He was 80. 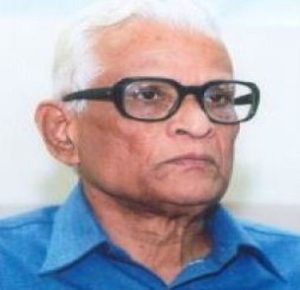 ii. Anand’s autobiography ‘Zombi’ had won Sahitya Akadmi award in 1991. He also written the book ‘Santsurya Tukaram‘ .The book was about 17th century saint poet Sant Tukaram.
iii. He was the president of the prestigious literary meet 82nd Akhil Bharatiya Sahitya Sammelan which was held in March 2009
iv. He had penned nearly 40 books which comprise collection of essays and poems among others.