We are here for you to provide the important current affairs may 7 2017 which have unique updates of all daily events from all newspapers such as The Hindu, The Economic Times, PIB, Times of India, India Today, Indian Express, Business Standard, all Government official websites. Our complete current affairs helps you to get more marks in Banking, insurance, UPSC, SSC,CLAT , Railway and all other competitive Exams. 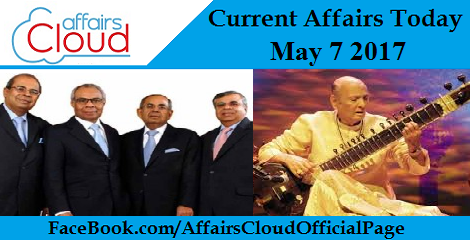 Jharkhand announces Jan-Dec FY
Jharkhand will become the second state in the country to announce its financial year from January to December. 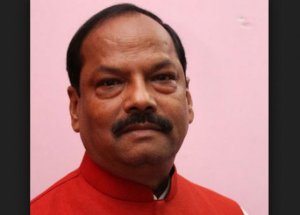 Key Points:
i. According to Jharkhand Chief Minister Raghubar Das the new budget will be scheduled in December.
ii. The new fiscal year for Jharkhand would commence from January 1, 2018 and end on December 31, 2018.
iii. Madhya Pradesh was first state to adopt the new financial year.
iv. In 2017, Jharkhand was the first state to table its budget in January.

IRCTC launches Southern Sojourn and Southern Jewels
This year Indian Railway Catering and Tourism Corporation has decided to launch two new circuits of its flagship luxury train Maharajas’ Express.
Key Points:
i. The luxury train will be running on two new tour circuits named as ‘Southern Sojourn and ‘Southern Jewels’.
ii. The Southern Sojourn will cover Goa, Hampi, Mysore, Ernakulam, Kumarakom and Trivandrum.
iii. The Southern Jewels will cover Chettinad, Mahabalipuram, Mysore, Hampi and Goa.
iv. The two new tour circuits have been launched with an aim to fulfill the needs of domestic travelers that are being planned during monsoon season.
v. The two new circuits have been planned for June/July while the regular trips will commence from September 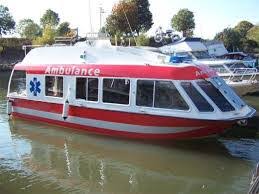 ii. The state government has sanctioned six boat ambulances for these areas which will be part of the 108 ambulance service.
iii. It is a part of an MoU signed between the State Government and the Ziquitza Health Care.
About Odisha
♦ Odisha Capital: Bhubaneswar
♦ Odisha Chief Minister : Naveen Patnaik
♦ Odisha Governor : Senayangba Chubatoshi Jamir

Govt to set up 100 training institutes to skill drivers
Union Ministry of Road Transport & Highways and the Union Skill Development Ministry have signed a Memorandum of Understanding (MoU) to set up 100 driver training institutes.
i. The MoU was signed in New Delhi on May 5, 2017 in the presence of Union Road Transport & Highways Minister Nitin Gadkari and Union Skill Development & Entrepreneurship Minister Rajiv Pratap Rudy.
ii.  The objective of this MoU is to meet the rising demand for certified commercial drivers in the automotive, construction and logistics sectors. Ministry of Road Transport & Highways will allocate Rs 1 crore grant for each of the 100 driver training institutes.
iii. Ministry of Skill Development & Entrepreneurship will provide stipend up to Rs. 15000 per trainee to compensate the wage loss during the training period. 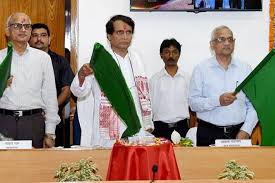 ii. The train will depart on every Tuesday, Thursday and Saturday from Naharalagun and on Monday, Wednesday and Friday from Guwahati. Enroute to Guwahati, the train will have stoppages at Harmuti, Rangapara (North) and Rangiya.
About Shatabdi Express:
Shatabdi Express is series of superfast passenger trains of Indian Railways. They are the second-most prestigious trains after Rajdhani Express. Shatabdi Express trains run over short to medium distance connecting metro cities to other important cities for tourism, pilgrimage or business. First Shatabdi train was started in year 1988.

India to hold festival in Egypt to mark Rabindranath Tagore’s birth anniversary
India will organise cultural festival in Egypt to mark 156th birth anniversary of Rabindranath Tagore. Maulana Azad Centre for Indian Culture (MACIC), the cultural wing of the Indian Embassy in Cairo will organise this festival from 8th -12th May 2017, which will feature a dance show, film screening, a play and painting competition.
i. The festival is being organised in cooperation with the Egyptian Ministry of Culture, Cairo Opera House, Cultural Production Sector, Dancers’ Guild and the Indian Community Association in Egypt.
ii. Screening of movie ‘Kabuliwala’ directed by Hemen Gupta. This movie is based on Tagore’s novel about an immigrant from Kabul who forms a bond with a young girl in India who reminds him of his daughter in Afghanistan.

people in the United Kingdom (UK). Their estimated fortune stood at £16.2 billion marking a £3.2 billion hike over previous year’s estimate.
i. Besides Hinduja Brothers, 40 other Indian-Origin Tycoons are on Sunday Times Rich List. India-born entrepreneurial brothers, David and Simon Reuben have ranked 3rd on the list with a fortune of £14 billion.
ii. Steel tycoon Lakshmi N. Mittal and family ranked at fourth position with assets worth £13.2 billion. It is to be noted that he Mittals topped the list in 2008 with £27.7 billion fortune.

Inter-Ministerial Delegation Participated in Basel, Rotterdam, Stockholm Conventions in Geneva
An inter-ministerial Indian delegation headed by Mr. Ajay Narayan Jha – Secretary, Ministry of Environment, Forest and Climate Change participated in the 2017 Conference of Parties (COPs) to the Basel, Rotterdam, Stockholm (BRS) Conventions.
i. All three conferences were held jointly and back-to-back from 24th April 2017 to 5th May 2017 in Geneva, Switzerland.
ii. Theme of these meeting was: “A future detoxified: sound management of chemicals and waste”

India redrawing BBIN transport plan as Bhutan withdraws
BBIN (Bangladesh-Bhutan-India-Nepal) Motor Vehicles Agreement (MVA) is an ambitious sub-regional transport project.
Key Points:
i. The BBIN is promoted by India and it aimed at creating seamless connectivity between the four countries. 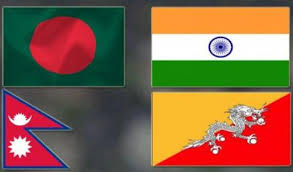 ii. Bhutan has announced that it will not be able to ratify the plan before it addresses some of concerns raised domestically over the project.The remaining three countries have already ratified the plan.
iii. With the final approval from Bhutan, the plan would have come into force.Now the meeting will be held on next month to redesign the routes.
iv. According to the present plan, some corridors are starting from Paro and Phuentsholing in Bhutan connecting Dhaka and then Kolkata.
v. Protocols have to be amended by India, Bangladesh and Nepal separately.
vi. This is an international agreement so each of these countries will have to pass the edited protocols through their respective Parliaments.
vii. The main reason of Bhutan of not signing the pact is because of environmental concerns raised by a section of the country’s citizens.
viii. The deal was signed in Thimpu on June 15, 2015.India’s share in sub-regional trade is over 90 per cent.
ix. According to the IMF in 2015, India’s volume of total trade with BBIN countries was about $10.82 billion, of which exports accounted for $9.35 billion and the remaining was India’s import from BBIN.

3 Indian-origin Scientists elected fellows of UK Royal Society
3 India-origin scientists, Krishna Chatterjee, Subhash Khot and Yadvinder Malhi are among the distinguished scientists from across the world, to have been elected Fellows of UK Royal Society for their outstanding contributions to science.
i. They are among the 50 scientists and 10 foreign members who have been elected as Fellows in this year’s announcement.
ii. Nobel laureate Venkatraman Ramakrishnan, the current as well as the first Indian-origin President of Royal Society welcomed the latest batch of fellows. 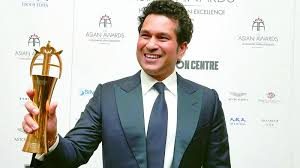 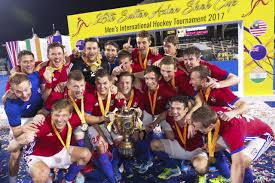 86-Year-Old Nepali Mountaineer dies on Mt Everest
Min Bahadur Sherchan, the oldest climber to scale the Mount Everest has died.He was 86-year-old.
Key Note:
i. Sherchan had scaled the Everest at the age of 76 in 2008 and recorded his name in the Guinness Book of World Records in 2010 as the oldest climber.
ii. He was a former British Gurkha. She aimed at reclaiming the crown of oldest climber to ascend the 8,848-meter peak.
iii. Five years later his record was broken by an 80-year-old Japanese national Yuichiro Miura.
iv. He was climbing the Everest for the cause of the world peace and to protect Earth
besides winning back the record. 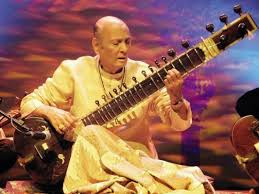 ii. He was honoured with Presidential award and Sitara-e- Imtiaz in 2005 and 2017, respectively.
iii. He belonged to the Mewati Gharana of Indian classical music.
iv. In 1963 he visited Pakistan for his maiden performance in Karachi.
v. He gave his first performance at age of five in Bombays Sunder Bi Hall.He had his first foreign tour to Poland.