India, US hold first Maritime Security Dialogue and made defence cooperation with one another
In order to promote the partnership in the Maritime Field, India and US made the successful first round of discussion under the Maritime Security Dialogue
First round of Discussion: Discover the scope of maritime cooperation under the framework of this maritime dialogue at the bilateral and multilateral level to be brought up
Venue: New Delhi
Issues Discussed:
i. Asia-Pacific Maritime Challenges
ii. Naval Cooperation
iii. Multilateral Engagement
Delegates: Officials of Defence and External Affairs Ministries and US Counterparts

Section 144 imposed in Chandigarh
i. Section 144 of Criminal Procedure Code (CrPC) of 1973 had been deployed in Chandigarh as a result protesters will not be allowed to enter into the city.
ii. The vicinity around the residences of the Chief Minister and Deputy Chief Minister Sukhbir Singh Badal in Sector 2 was sealed with barricades.
iii. This protest by the AAP party is against the alleged Rs 12,000-crore missing food grain scam in Punjab, rampant corruption and failure of the Punjab government to curb the drugs racket.
iv. The protesting party has claimed that over 50,000 supporters will protest against the chief minister’s residence.
Chandigahrh:
Chandigahrh is a city and a union territory also serves as the capital of the states of Punjab and Haryana. Chandigarh emerged as the cleanest city in India in the latest swachh Bharat Rankings.

Military tourism initiative ‘Veer Yatra’ launched in Pune
i. Maharashtra Ex-servicemen’s Corporation has launched the Veer Yatra, an initiative by the Military body that aims to spice up a vacation with on-locale narratives of real-life dare-devilry and heroism.
ii. This Yatra is for civilians provides a peek into the lives of the country’s defence forces, also focusing on areas of historic importance. It also targets to provide employment to 1,000 ex-servicemen and war widows over the next year.
iii. This yatra includes a range of specially designed holiday packages that could take tourists to military training academies, battlefields, and high-altitude pickets, mountain passes such as Nathu La and Zoji La or border posts along the Line of Control.

i. The Ministry of Environment, Forest and Climate Change and Department of Animal Husbandry, Dairying & Fisheries organized a day-long national conference on Gaushalas -cowsheds.
ii. Environment, Forest and Climate Change Minister Prakash Javadekar underlined that villages were traditionally planned in such a manner that there were facilities for human beings and fodder for animals.
iii. The Ministry is mulling for draft of a policy is being prepared, which will include a provision to provide protein-rich fodder free of cost to the people living in villages adjoining the jungles.
Livestock in India:
♦ Livestock’s are domesticated animals raised to produce commodities such as food, fiber, and labor such as cattle and goats.
♦ According to Agriculture Ministry there are 19 crore livestock in the country, which is about 14% of the world’s livestock and out of this, 15 crore are indigenous livestock.

Odisha to launch Green Passage Scheme for orphan students
i. The Odisha government has coined a special scheme named Green Passage for orphan students. This proposed scheme will function under the Higher Education Department.
ii. Odisha Chief Minister Naveen Pattnaik asked all government and private universities to implement the plan. Of this 16,382 orphans are currently pursing higher studies in 272 institutions in the State.
iii. This scheme eases the onus on the orphan students due to pressure of fees as admission fees, examination fees and tuition fees for pursuing higher education. They will also be provided free hostel facilities and food.
Odisha:
♦ Capital: Bhubaneswar.
♦ Chief Minister: Naveen Patnaik.
♦ Governor: S.C. Jamir.

Italian Parliament approves same-sex civil unions
i. The Italian senate has passed legislation legalizing same-sex civil unions, with 372 voting in favour, 51 against and 99 abstaining.
ii. Up To date, more than 20 countries have legalised gay marriage. The law also makes this right available to unmarried heterosexual couples.
iii. With this, it has become the last country in Western Europe to do so.However, the bill has yet to be assented by the Italian President.
Key provisions:
♦ The proposed law legalise same-sex couples many of the same rights as married heterosexual couples. Partners in a civil union can apply for public housing as couples.
♦ They can also inherit their partners’ pensions. Assets inheritance guidelines will be the same as for married couples.

RBI authorises 29 agency banks to accept payments of I-T dues
i. Reserve Bank of India has appealed to income tax assessees to remit their income tax dues sufficiently in advance of the due date to avoid last minute rush.
ii. This iniative will obviate the inconvenience involved in standing in long queues at the Reserve Bank offices.
iii. In a bid to cope with the pressure of issuing receipts RBI has taken such a move which is although additional counters to the maximum extent possible are provided for the purpose.
iv. Totally 29 agency banks are authorised to accept payments of Income Tax dues Which includes State run lenders as well as Private players,
They are 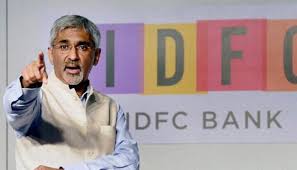 i. Mumbai based IDFC Bank has launched Twitter campaign dubbed   #IDFCTwitterResume which will help in applying for a new job as simple as sending out a tweet.
ii. The newest private bank has just rolled out the first-of-its-kind campaign, where you can sell yourself in 140 characters and land a job in the bargain.
iii. The soft launch intends to post job vacancies that there are about 12-14 profiles on offer at junior to mid-levels, largely across sales, service and operations.
iv. The bank intends to make around 500-700 closures through this medium even as it looks to nearly double its current workforce to 4500-odd by the end of this fiscal.
IDFC Bank:
♦ Founded: 2015
♦ Headquarters: Mumbai
♦ Managing Director& CEO: Rajiv B. Lall
♦ Tagline: Banking Hatke

DBS Bank to set up new technology hub in Hyderabad
i. Singapore-based DBS Bank has decided to set up its biggest technology hub outside its headquarters in Hyderabad. The company also plans to hire about 1,500 people over the next two years.
ii. This decision from the Singapore major is to focus on technology and in order to grow it, the lender has launched a mobile-only bank recently.
iii. This tech hub comes at a time when the lender is awaiting clearance from the RBI India to convert into a wholly-owned subsidiary in the country.
Appointment:
• The lender has appointed Mohit Kapoor as the head of its Technology Development Centre in Hyderabad.
• Earlier he was the global delivery leader and chief technology officer at Bank of America.
DBS Bank:
♦ Headquarters: Singapore
♦ CEO: Piyush Gupta.

Tata Trusts inks pact with the/Nudge Foundation
i. Tata Trusts and Bangalore-based non-profit Nudge Foundation entered into a strategic partnership to help alleviate poverty through product innovation and capacity building.
ii. Under this tie-up Tata Trusts will help in much needed product innovation in the poverty alleviation efforts, and support capacity building of the team to scale the results.
iii. The portfolio of the Trusts focuses on the inclusive growth of marginalised populations in both rural and urban areas. Besides development of skills and building the capacity of Community Based Organisations is an important focus area.
iv. This comes after the success of the recently concluded pilot iniative of both sides called ‘Mphasis Gurukul’ in Bangalore. 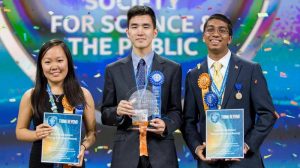 i. Indian-American boy Syamantak Payra has won the prestigious Intel Foundation Young Scientist Award for developing a low-cost electronically-aided knee brace that enables a person with a weakened leg to walk.
ii. The award was given by Intel Corporation and the Society for Science and the Public (SSP) at the 2016 ‘Intel International Science and Engineering Fair’ in Arizona that featured more than 1,700 young scientists selected from 419 affiliate fairs held in 77 countries.
iii. A 15-year-old teen Payra is from Texas has begged USD 50,000 award along with 17-year-old Kathy Liu.
iv. These ISEF awards are based on students’ abilities to tackle challenging scientific questions, use authentic research practices, and make solutions for the problems.
Intel:
♦ Headquarters:  California, United States.
♦ CEO: Brian Krzanich
♦ Founded: 1968 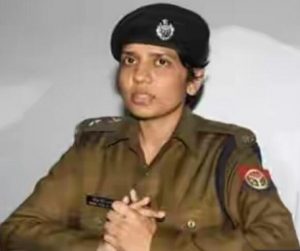 i. Uttar Pradesh government has appointed Manzil Saini as the new Senior Superintendent of Police (SSP) of state capital Lucknow. Saini will fill the shoes of Rajesh Pandey who has been attached to the DGP office.
ii. With this UP thus making her the first-ever woman district police chief in the state capital.
iii. The police officer was earlier posted in Badayun, Muzaffarnagar and Mathura.Since started her career as the police force, the 2005 batch IPS officer has hit headlines. She’s popularly known as Lady Singham.
iv. Saini she launched a crackdown against unauthorized usage of party flags by Samajwadi Party workers in four-wheelers and also penalizing them for bearing tinted windows during her tenure as an SSP in Etawah.

Pfizer to buy Anacor Pharma in $5.2 bn deal
i. New York based global Pharmaceutical Corporation Pfizer Inc will buy California based Anacor Pharmaceuticals in a deal valued at $5.2 billion, net of cash, to increase access to Anacor’s experimental gel for treating eczema.
ii. Present company’s inflammation and immunology medicines collection includes Enbrel and Xeljanz, which target auto-immune diseases.
iii. The acquisition will facilitate the American major to access a non-steroidal topical gel, crisaborole, which is presently under review by the US Food and Drug Administration for the treatment of mild to moderate eczema.

NASA launches near-space monitoring balloon from New Zealand
i. NASA has successfully launched a 532,000 cubic metres sized super pressure balloon from New Zealand’s South Island Wanaka Airport to conduct near-space scientific investigations. The aim is for it remain airborne for more than 100 days.
ii. After all the previous attempts were failed the fifth attempt to get the massive balloon airborne make success.
iii. The massive balloon is likely to circumnavigate the globe about the southern hemisphere’s mid-latitudes once every one to three weeks, depending on wind speeds in the stratosphere.
iv. This will floated at an altitude of 33.5 kms (20.8 miles) and it will be visible from the ground, particularly at sunrise and sunset, in the southern hemisphere’s mid-latitudes, such as Argentina and South Africa.

IT dept launches e-portal to fast track taxpayer’s grievances
i. The Income Tax department has launched electronic grievance redressal portal called ‘e-nivaran’ to clear taxpayers grievances and ensure early resolution of their complaints in fast track route.
ii. The system is called ‘e-nivaran’ means electronic solution which integrates all online and physical complaints gathered by the department at this platform which will be monitored by the AssessingOfficer.
iii. Recently an exclusive also separate window for grievance redressal has been launched in the Income Tax Business Application electronic platform for the regular operations.
iv. The new system is called unified grievance management system which is not only records the origin of the grievance on the electronic platform it works on, but it also keeps tracking it till it reaches its logical conclusion for final resolution 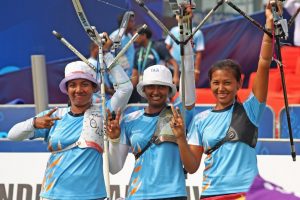 Women’s Category:
i. Indian women’s archery team that qualified for the Rio Olympics comprising Deepika Kumari, Bombayla Devi and Laxmirani Majhi was named for the Rio Olympics
ii. The women’s trio will compete in the individual events as well as team event at the Rio Games to be held in August. They were selected after a series of selection trials in the last three months.
Men’s Team for World Cup:
♦ The Indian body AAI also announced a three-member men’s team consisting Jayanta Talukdar, Atanu Das, Mangal Singh Champia for the third stage World Cup in Antalya, Turkey, next month in order to have a shot at Olympic berths.
♦ However India has earned one individual spot for the Olympics in men’s archery during the World Championships last year.