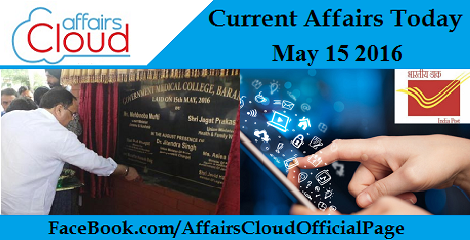 India third in attractiveness index of renewable energy: EY Report
India ranks at third position after the United States and China in the category of Renewable Energy Country Attractiveness Index reported by EY.
♦ India achieved the position due to strong focus of the Government stress on Renewable Energy with the implementation of Renewable energy projects.
♦ Ranked on the basis of Size and Scale of renewable activity 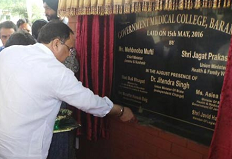 colleges, to be set up at a cost of around Rs 189 crore each, in Jammu and Kashmir.
ii. These colleges will be built at Rajouri in Jammu, Anantnag in south Kashmir and Baramulla in the north.
iii. These Medical Colleges will be attached to district hospitals of these three districts. Each medical college is to have intake capacity of 100 for MBBS course.
iv. Although these colleges were announced in 2014, it would come in operation from the next academic session.
v. These colleges will need to be inspected and approved for admitting students after the infrastructure and human resource development was complete.

Violation of model code of conduct: EC issues showcause notices to Jayalalithaa, Karunanidhi
i. The Election Commission issued show cause notices over violation of Model Code of Conduct Tamil Nadu Chief Minister, J Jayalalithaa and DMK Chief, M Karunanidhi.
ii. EC asked reply them regarding their violation of which have virtually similar wordings mentioned that prima-facie the manifestos of the two parties have not substantially fulfilled the guidelines of the Commission.
iii. The Election panel gave them time till 5 PM on May 15 to respond to explain your stand for non-compliance and also reflect the rationale for the promises made in your manifesto and broadly indicate the ways and means to meet the financial requirement for the same.
iv. The Commission has also asked both the leaders to respond to its notice if failing it would take appropriate action. 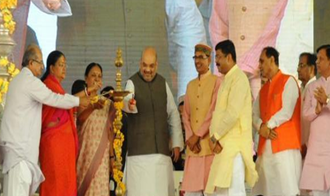 i. Bharatiya Janata Party (BJP) national president Amit Shah will inaugurate the second phase of Pradhan mantri Ujjwala Yojana at Dahod district of Gujarat.
ii. In the second phase of Pradhan Mantri Ujjwala Yojana, the free LPG connection will be given to BPL families in tribal district of Dahod.
iii. This scheme was launched the scheme in Uttar Pradesh on May 1. It aims to provide free LPG connections to about five crore families living below poverty line across the country.
iv. The ambitious Rs 8,000 crore iniative will be funded using the money saved from 1.13 crore cooking gas users voluntarily giving up their subsidies through PM’s Give It Up initiative.

MoS I&B meets Global Film Industry stakeholders at Cannes Film Festival
i. Minister of State for Information and Broadcasting and Lieutenant-Colonel Rajyavardhan Singh Rathore met Minister of State for Culture, Communications and Creative Industries, UK, Ed Vaizey in the international film industry at 69th Cannes Film Festival-2016 in France.
ii. The intent of the meeting was to impart them about the new initiatives taken by India in the films sector and the myriad opportunities available for the global film industry in India.
iii. In the sidelines he had discussed about the participation of United Kingdom in the International Film Festival of India held every year in Goa. 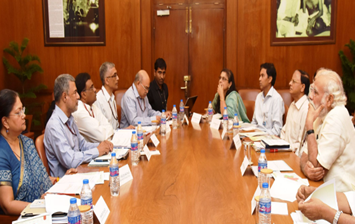 i. In a bid to discuss the Water Scarcity on the eve of drought Prime Minister Narendra Modi chaired the high level meeting with Chief Minister of Jharkhand, Raghubar Das and Rajasthan CM Vasundhara Raje to mitigate measures in their respective states.
ii. The PM has called for a mass movement to be generated for water conservation and rainwater harvesting. Prime Minister Modi asked Rajasthan government to review the situation in the state also released Rs. 911.64 crore to the State under the National Disaster Response Fund.
iii. He also held a high level meeting with Jharkhand Chief Minister Raghubar Das, on the drought and water scarcity situation in the state also released Rs 273 crore as central share of State Disaster Response Fund for 2015-16.

India, Bangladesh power ties with 21st-century nuclear deal
India inked a 21st century nuclear agreement with Bangladesh to engage the bilateral neighbourhood relationship between two nations.
The core of the Agreement i. Energy ii. Connectivity iii. Securitybangladesh
♦ Signed between Minister of External Affairs and Bangladesh Department of Science and Technology
♦ Four Indian based companies — BHEL, Reliance, Shapoorji-Pallonji and Adani — have bid to set up power plants in Bangladesh

UN agricultural arm IFAD to grant $150 million to India in next 3 years
i. Rome-based International Fund for Agricultural Development an arm of UN Nations will provide grants worth $150 million to India in the next three years to aid the farm sector.
ii. The IFAD’s projects in rural areas have been able to improve the material conditions of the households and health of women.
iii. The UN’s arm has been working with for last three decades, it has provided $17.7 billion in grants and low-interest loans to projects reaching about 45.9 crore people in rural areas to reduce poverty in India.
iv. Besides IFAD is working with India to reduce the wastage of perishable produces due to lack of infrastructure.
International Fund for Agricultural Development:
♦ The agency was established in 1977 which is specialized agency of the United Nations dedicated to eradicating rural poverty in developing countries.
♦ The President of the IFAD is Kanayo F. Nwanze.

Indian short film ‘Beti’ at Seattle International Film Festival
i. A four minute documentary film ‘Beti’ which is a non-fiction on girl child education has been invited for a special screening at the 42nd Seattle International Film Festival (SIFF), Washington DC. The movie is directed by Shivain Arora.
ii. The short film promotes girl child by narrating the real life story of three girls from a government school and their dream for the future
iii. The short is the only film from India to be featured amongst 421 films representing 85 countries and will be screened on May 30, which is Seattle Memorial Day at the Film Festival.

US and IAF conclude Exercise Red Flag’ in Alaska
i. An Indian Air Force (IAF) team successfully concluded their four-week Red Flag aerial combat exercises at Alaska in the U.S.
ii. This Joint trial is to showcase the IAF’s capability in undertaking integrated air ops but also to absorb operational lessons from the exercise engagements.
iii. This Exercise is a successor to the Cope Thunder exercise series also the main phase of the exercise had commenced on last month with a mix of combat and support elements from the IAF, US Air Force and US Navy.
iv. As part of the Exercise India flew 10 aircraft which comprising four Su-30MKIs, four Jaguars and two IL-78 aerial refuelling tankers. A team of over 170 personnel took part in the exercises held from April 28 to May 13. i. The American mission in India has won the prominent Greening Diplomacy Initiative Award of the US State Department for its innovative approach to greening throughout the country.
ii. The Green Diplomacy Award was chosen by employee vote went for include Mission India for an innovative whole-of-country approach to greening. Upon this Consulate General Kolkata, even reduced water use by 45 per cent through waste water recycling.
iii. On each Earth Day, GDI Awards presented to recognise innovative leadership within the Department of State in energy and environmental diplomacy.
iv. Indian-American Richard Verma is the current US Ambassador to India.

Claire Furlong is new ICC General Manager: Strategic Communications
i. Cricket governing body ICC appointed Claire Furlong as new General Manager to steer its strategic communications, she will assume his duty on July 17.
ii. Furlong is presently working at Hannover Sport Company as a head of sport with clients including England and Wales Cricket Board, NFL and Asian Football Confederation.
iii. Earlier she ran her own consultancy for a number of years with a range of clients that included team England for whom she led the media operation at Glasgow 2014 Commonwealth Games.
ICC:
♦ Headquarters: United Arab Emirates
♦ CEO: Dave Richardson
♦ President: Zaheer Abbas

Justice Mukul Mudgal appointed as deputy chairman of FIFA governance committee
i. Ex-Chief Justice of Punjab and Haryana Mukul Mudgal has been appointed as the deputy chairman of world governing body FIFA’s Governance Committee.
ii. The FIFA’s governance committee which will be headed by Portuguese Luis Miguel Maduro, who is a former European Court of Justice Advocate General.
iii. The Judge earlier in 2013 headed the IPL 2013 spot-fixing probe and recently he was also included in by the Asian Football Federation in a similar roles.
iv. Mudgal who is also roped in overseeing the conduct of international cricket matches and IPL games at the Feroz Shah Kotla Stadium in New Delhi.
FIFA:
♦ Founded: 1904.
♦ Headquarters: Zürich, Switzerland.
♦ President: Gianni Infantino
♦ Membership: 211 National Sides

ASI core committee chairman G C Mitra resigns from his post
i. Delhi based Archaeological Survey of India technical core committee chairman GC Mitra resigned from his post.
ii. Mitra is put on preservation work of Jagamohan, the chamber facing the sanctum sanctorum of Sri Jagannath Temple in Puri Odisha.
iii. He might have taken the decision after ASI rejected the estimation of 2.5 crore rupees towards purchase of stainless steel to be used in the repair plan of Jagamohana at Srimandir prepared by the core committee.
Archaeological Survey of India
♦ Inception: 1861
♦ Headquarters: New Delhi.
♦ The Indian government agency runs under Cultural Ministry which is responsible for archaeological research and the conservation and preservation of cultural monuments in the country. 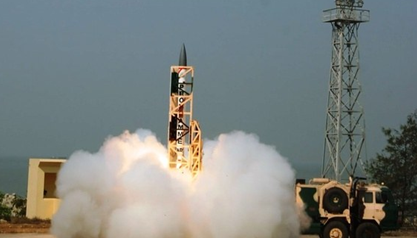 from the launch complex of Abdul Kalam Island in Odisha.
ii. The advanced version of low altitude supersonic ballistic interceptor missile dubbed as Ashwin was fired. This was 12th test of the interceptor missile.
iii. The home grown missile developed by DRDO which is a single-stage missile powered by solid propellants. It is 7.5 metres tall and weighs around 1.2 tonnes. It had a diameter of less than 0.5 metre.
iv. While the target missile is run by liquid propellants. It is 11 metres tall and weighs five tonnes. Its diameter is one metre.
v. The first phase of the missile seeks to destroy incoming enemy missiles in exo-atmospheric region and the second phase predicts to kill enemy missiles of more than 2,000 km range in inside the atmospheric region.

1,284 planets discovered beyond solar system
i. NASA’s Kepler mission has helped its scientists to discover a total of 1,284 more planets beyond our solar system.
ii. The discovery brings to 21 the total number of known planets with such conditions, which could pave the way for life also found nine planets suitable for surface water.
iii. With the Kepler space telescope Astronomers found that planets outside the solar system would be 3,264 that called exo planets which are searched for habitable planets like Earth.
iv. The Telescope watched about 150,000 stars, looking for slight changes in the amount of light that came from those stars.
v. In the NASA’s new planets, just about 550 could be rocky like Earth. Nine planets are the right distance from a star to support temperatures at which water could pool.

International Day of Families
i. The International Day of Families is celebrated annually on the 15th of May. This day provides an opportunity to promote awareness of issues concerned with families and to increase knowledge of the social, economic and demographic processes affecting families.
ii. It was proclaimed by the UN General Assembly in 1993 with resolution of the body and reflects the importance society attaches to families.
iii. The theme of this year (2016) is – Families, healthy lives and sustainable future.