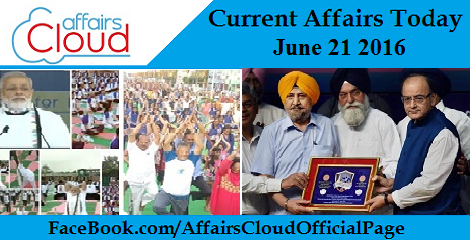 New Super fast train between Vijayawada-Secunderabad launched
i. Union Railway Minister Suresh Prabhu and Chief Minister N Chandrababu Naidu tonight flagged off the new superfast intercity express train between Vijayawada and Secunderabad with just one stop.
ii. This train will cover a distance of 351km between the two cities in less than 6 hours has been announced to ease travel of Andhra Pradesh Government employees to the new capital region from Hyderabad.
iii. The Rail Minister also laid the foundation stone, through a remote video link, for the doubling of present rail line between Guntakal and Kalluru in Anantapuramu district.

the 300th Martyrdom Day of Banda Singh Bahadur. Bahadur is regarded as the first sovereign ruler of Punjab.
ii. The IB Minister also urged Delhi Sikh Gurdwara Management Committee to make a documentary on the life and times of Banda Singh Bahadur.
iii. Banda Singh, who was born in 1670 in Rajouri, had sacrificed his life at the age of 46 to safeguard honour and tradition. He established his rule by defeating Mughals in 1710.

Expert Committee set on examining Specific Relief Act, 1963 submits its Report to Union Law & Justice Minister
i. The Expert Committee led by Anand Desai set on examining the Specific Relief Act, 1963 submitted its Report to Union Law & Justice Minister D.V.Sadananda Gowda in New Delhi.
ii. The committee infused some modifications in the Act that will help in ensuring the ease of doing business.
Recommendation of the committee:
♦ To modify the approach, from damages being the rule and specific performance being the exception, to specific performance being the rule, and damages being the alternate remedy.
♦ To take measures that reducing the discretion granted to Courts and tribunals while granting performance and injunctive reliefs. Also announce provisions for rights of third parties.
♦ To ruminate addressing unacceptable contracts, unfair contracts, reciprocity in contracts etc., and implied terms.

SBI in ‘Hall of Shame’ of banks funding cluster bomb makers
i. India’s largest lender State Bank of India has been named in a Hall of Shame list of 158 banking and financial institutions worldwide that have invested billions of dollars in enterprises making cluster bombs.
ii. The list was prepared by Dutch campaign group PAX Worldwide Investments in Cluster Munitions report.
iii. State Bank of India (SBI) is the only Indian company on the list that includes global giants like JP Morgan, Barclays, Bank of America and Credit Suisse.
iv. In the list maximum number of 74 banks are from the US, followed by China (29) and South Korea (26).

I-T department to block PAN, LPG subsidy of tax defaulters
i. Income Tax Department is set to block Permanent Account Number (PAN) of wilful defaulters and their LPG subsidy and take measures to ensure that they are not sanctioned loans.
ii. A slew of such measures have been suggested by the tax department, to be started this financial year, in order to curb the menace of large-scale tax avoidance and evasion.
iii. The department has also mulling to subscribe to the Credit Information Bureau Limited (CIBIL) data, on a possible payment basis, to check out the financial activities of debtors and commence action against them for recovery and freezing of assets.

Rules for premature withdrawal of PPF announced
i. The Finance Ministry has announced new rules allowing for premature withdrawal of the Public Provident Fund (PPF) account deposit scheme account has completed five years.
ii. A subscriber shall be allowed premature closure of his account or account of a minor of whom he is the guardian on ground that the amount is required for treatment of serious ailments or life-threatening diseases.
iii. The withdrawal will also be allowed if the amount is required for higher education of the account holder or the minor account holder, on production of documents and fee bills in confirmation of admission in India or abroad.

Tata Power wins solar project in Maharashtra
i. Tata Power Renewable Energy, a wholly owned Tata Subsidiary has bagged 30 MW solar grid connected photovoltaic project in Maharashtra under the National Solar Mission.
ii. TPREL has received the Letter of Intent (LoI) to develop the project and will sign a 25-year power purchase agreement with NTPC Vidyut Vyapar Nigam.
iii. The project have been awarded in the Domestic Content Requirement category under the Jawaharlal Nehru National Solar Mission (JNNSM) under ‘State Specific Bundling Scheme’,
iv. This LoI is the third project bagged by the company in recent months, which takes its solar bid wins to 145 MW.

Twitter buys artificial intelligence firm Magic Pony
i. Micro–blogging major Twitter has announced to buy artificial intelligence startup Magic Pony to help it enhance video and live services on its platform.
ii. London based Magic Pony which was started by entrepreneurs and Imperial College graduates Rob Bishop and Zehan Wang in 2014, will be joining forces with the social network to improve the visual experiences that are delivered across their apps. 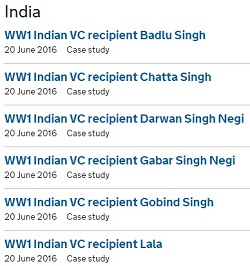 the exciting stories of war heroes, including six Indians, as part of government’s centenary celebrations to mark World War I. Which can be accessed through the official gov.uk portal.
ii. Totally 175 men from 11 overseas countries were awarded Britain’s highest award for valour, the Victoria Cross (VC), during the war.
iii. The new Digital Archive launched to chronicle individual biographies of the following heroes from India. Softbank president Nikesh Arora resigns
i. Softbank President and COO Nikesh Arora has resigned from the company with immediate effect, However he will stay for a year.
ii. Arora will move to an advisory role in advisory role effective July 1, 2016, and continue to support SoftBank.
iii. Arora was hired in 2014 after a decade at Google stint and promoted to president in June of last year. i. Chinese supercomputer using domestic chip technology named Sunway TaihuLight with 93 petaflop/second speed was declared as the world’s fastest supercomputer.
ii. The system was publicized in the TOP500 list of supercomputers released at the International Supercomputing Conference (ISC) in Frankfurt, Germany.
iii. The list topped by China leads with 167 systems and the USA is second with 165. The Asian share of 218 systems, up from 173 in November 2015, includes 8 supercomputers owned by Indian-based organizations.
iv. The TaihuLight is encompassed of some 41,000 chips, each with 260 processor cores. This makes for a total of 10.65 million cores, compared to the 560,000 cores in America’s top machine.

HP launches the world’s thinnest laptop, Spectre 13
i. HP has launched the Spectre 13 in India, a laptop that’s claimed to be the thinnest in the world by the US-based firm. With a thickness of 10.4mm, it’s thinner than both the 12-inch MacBook and 13-inch MacBook Air.
ii. The cutting edge svelte dimensions, the company has decided to go all out with its latest top-end laptop, and the Spectre 13 is the first to sport its new logo for the premium range.
Features of HP Specture:
♦ HP Spectre 13 is 10.4mm thick, and thinner than the MacBook.
♦ It weighs in at 1.11kg, with a carbon fibre and aluminium build.
♦ The 4-cell 38Whr Li-ion battery that can keep the laptop running for 5 hours on a single charge.
♦ It has been priced starting at 1,19,990 in India.

Mars crater named after Nepal quake-hit village Langtang
i. The International Astronomical Union has named the crater after Langtang which is also a popular trekking site that was worst hit by the 2015 earthquake in Nepal.
ii. In the Earthquake at-least 215 people were killed in Langtang when the April 25 quake triggered an avalanche that swamped the village.
iii. The Astronomical Union has now named a 9.8 km (six mile) wide crater on Mars as Langtang.
iv. The researcher behind the move, Dr. Tjalling de Haas, announced that he chose this name because his colleague had worked there while studying Himalayan glaciers.
International Astronomical Union
♦ Headquarters‎: ‎Paris, France
♦ President‎: ‎Silvia Torres-Peimbert 4, 6-3 managed to retain the Queen’s title and lift the trophy for a record fifth time.
ii. Raonic led by a set and 3-0 before Murray became the first player this week to break the Canadian’s serve, doing so twice in succession. It was Murray’s 37th career ATP title and his second of 2016.
iii. The Queen’s Club Championships is an annual tournament for male tennis players, held on grass courts at the Queen’s Club in West Kensington, London.

World Hydrography Day
i. World Hydrographic Day was celebrated worldwide annually on 21 June to publicise the work of hydrographs and the importance of it that has been celebrated since 2005.
ii. This year the day is observed with Theme: “Hydrography – the key to well-managed seas and waterways to highlight the fundamental importance of hydrography. The day was adopted by the International Hydrographic Organization.
International Hydrographic Organization
♦ Established: 1921.
♦ Headquarters‎: ‎‎Monaco.