We are here for you to provide the important current affairs January 26 2018 which have unique updates of all daily events from all newspapers such as The Hindu, The Economic Times, PIB, Times of India, India Today, Indian Express, Business Standard, all Government official websites. Our complete current affairs helps you to get more marks in Banking, insurance, UPSC, SSC, CLAT, Railway and all other competitive Exams. 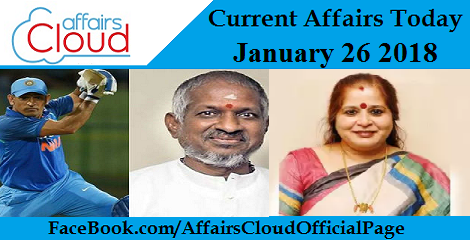 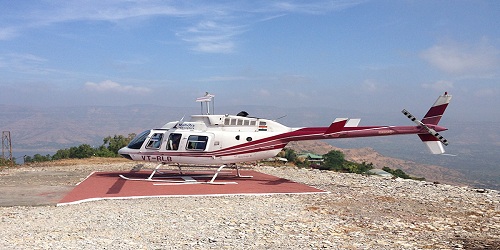 Overview of Maharashtra Government’s Helipad Policy:
i. This policy has been framed by the aviation department of Maharashtra Government’s General Administration Department. Need for such policy was felt owing to a series of near-mishaps of helicopters ferrying Chief Minister Devendra Fadnavis during last one year.
ii .One of the key rule to be followed is that helipads should be located close to cities but away from densely populated areas.
iii. Height restrictions have been imposed for constructing buildings in the area where a helipad is located.
iv .The helicopter pilot should not start the helicopter, neither should he/she start the air conditioning before the VVIP passenger gets on board.
Quick Facts about Maharashtra:
♦ Capital – Mumbai (summer), Nagpur (winter)
♦ Current Governor – C. Vidyasagar Rao
♦ Current Chief Minister – Devendra Fadnavis
♦ Important National Park – Sanjay Gandhi National Park

Pradhan Mantri LPG Panchayat launched in Jharkhand
On 25th January 2018, Jharkhand Chief Minister Raghubar Das launched ‘Pradhan Mantri LPG Panchayat’ at Balijore village, in Dumka district of Jharkhand.
Pradhan Mantri LPG Panchayat:
i. Raghubar Das said that, Jharkhand is the first state in India, where beneficiaries are provided stoves along with gas connections.
ii. He said that, Rs 300 crore was alloted in the budget for LPG connection and stove distribution. Out of that, 10 lakh beneficiaries have been provided with connections so far.
iii. He added that, Jharkhand has set a target to provide connections to 28 lakh poor families in 2018.
iv .He also said that, ‘Adivasi Vikas Samiti’ will be formed in tribal populated areas. ‘Gram Vikas Samiti’ will be established in villages having less tribal count with 7 members in small villages and 11 members in bigger villages.
Some wildlife sanctuaries & tiger reserves in Jharkhand:
♦ Dalma Wildlife Sanctuary
♦ Hazaribag Wildlife Sanctuary
♦ Palamau Tiger Reserve 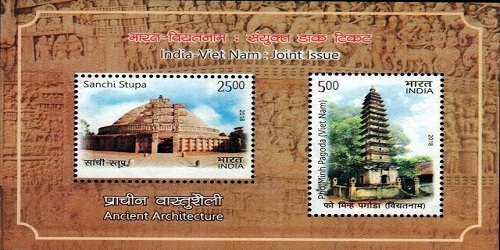 India, Vietnam release first ever commemorative stamps:
i. India and Vietnam have released the first set of commemorative postage stamps. The theme of these stamps is ‘ancient architecture’.
ii. Two set of stamps were unveiled. They carried a picture of Sanchi Stupa and Thien Mu Pagoda. These stamps were designed by both Indian and Vietnam artists.
iii. AN Nanda, Secretary, Department of Posts and Truong Monh Tuan, Vietnam IT and Communications Minister, were present at the stamp release event.
About Department of Posts (DoP):
♦ Headquarters – New Delhi
♦ Founded – 1854
♦ Secretary – AN Nanda

NSIC inks pact with Malaysia’s SME Corporation
On January 25, 2018, National Small Industries Corporation (NSIC) signed a memorandum of understanding (MoU) with SME Corporation Malaysia for cooperation in development of small and medium businesses (SMBs) in India and Malaysia.
Details about NSIC-SME Corporation Malaysia MoU:
i. The MoU was signed in presence of Union Micro, Small and Medium Enterprises (MSME) Minister Giriraj Singh.
ii. Under this MoU, two entities will work together for improving global competitiveness of Indian and Malaysian MSMEs. Besides, they will also enter into technical collaboration for the same.
iii .In addition to NSIC-SME Corporation Malaysia MoU, three other agreements were also signed between Indian and Malaysian organisations to strengthen cooperation among smaller businesses in both the countries.
Quick Facts about NSIC:
♦ Founded in – 1955
♦ Headquarters – Delhi
♦ Functions under – Union Ministry of Micro, Small & Medium Enterprises 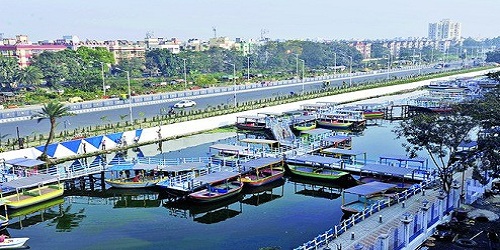 Usha Ananthasubramanian – Chairman of IBA:
i. Usha Ananthasubramanian is the MD and CEO of Allahabad Bank. She was elected as Chairman of IBA for 2017-18 by its Managing Committee.
ii.The Chairman post of IBA was vacant since the superannuation of Jatinder Bir Singh. Rajnish Kumar, Chairman, State Bank of India, has been elected to the post of Deputy Chairman of IBA for 2017-18.
About Indian Banks’ Association (IBA):
♦ Objective – to promote and develop progressive banking principles, practices and conventions and to contribute to the developments of creative banking in India
♦ Formed – 26 September 1946 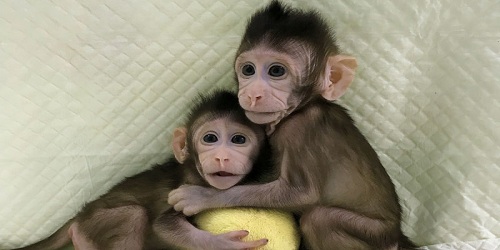 Monkeys cloned for the first time:
i. Zhong Zhong and Hua Hua are female monkeys that are 7 and 8 weeks old. This success was mentioned in the journal Cell.
ii. This is the first time, researchers have cloned and created two healthy monkeys. These monkeys were created through the cloning method that was used to produce Dolly the sheep in 1996.
iii. The Chinese scientists collected the DNA-containing nucleus from monkey eggs and replaced it with DNA from monkey fetus.
iv .These modified eggs grew and divided. They developed into an embryo and this was placed inside the female monkeys to develop and give birth.
About Cell (journal):
♦ Publisher – Cell Press
♦ Discipline – Biology
♦ Language – English
♦ Edited by – Emilie Marcus 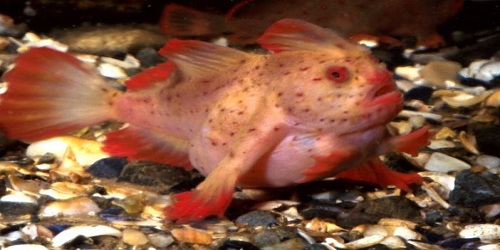 Red Handfish:
i. The red handfish was considered extremely rare and they were confined to a small reef in Frederick Henry Bay near Hobart in south-east Tasmania.
ii. They were found recently at a nearby reef in Tasmania’s south-east coast by researchers from University of Tasmania’s Institute of Marine and Antarctic Studies and Reef Life Survey.
iii. These fishes are likely to be genetically isolated because they are not capable of doing long swims.
iv. On the whole, there are three species of critically endangered handfish in Tasmania. The red handfish is the rarest of the three species.
v. They are just seven or nine centimetres long. They belong to the species Thymichthys politus.
About Reef Life Survey:
♦ Purpose – Marine life monitoring programme
♦ Region – Tasmania Death of Supriya Devi:
i. Supriya Devi was 85 years old. She is survived by her daughter Soma.
ii. She was born on 8th January 1933. She was one of the leading Bengali actors of her time.
iii. She received Padma Shri award in 2014. She has also received the Banga-Vibhushan award in 2011. She had acted in nearly 50 films.
About Film and Television Institute of India (FTII):
♦ Chairman – Anupam Kher
♦ Director – Bhupendra Kainthola
♦ Location – Pune, Maharashtra 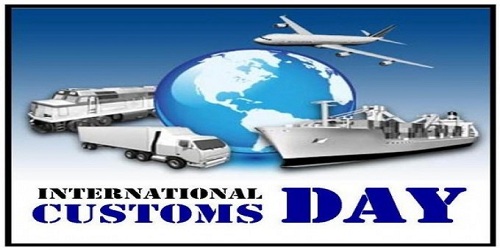