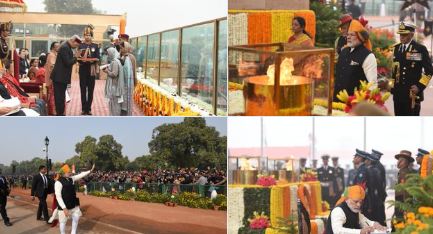 Bharat Parv being organized as part of Republic Day 2018 Celebrations

With an objective to generate a patriotic mood and promote the rich cultural diversity of India, Government of India has organised Bharat Parv event at the Red Fort, Delhi from 26thto 31st January, 2018.

Corporal Jyoti Prakash Nirala sacrificed his life while shooting down two terrorists in Jammu and Kashmir.

On January 26, 2018, on the occasion of the India’s 69th Republic Day, the Indian mission in Nepal handed over 30 ambulances and six buses to various hospitals and non-profit charity organisations of Nepal.

The 66th Republic Day of India