We are here for you to provide the important current affairs December 26 2017 which have unique updates of all daily events from all newspapers such as The Hindu, The Economic Times, PIB, Times of India, India Today, Indian Express, Business Standard, all Government official websites. Our complete current affairs helps you to get more marks in Banking, insurance, UPSC, SSC, CLAT, Railway and all other competitive Exams. 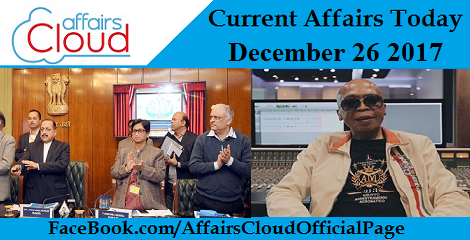 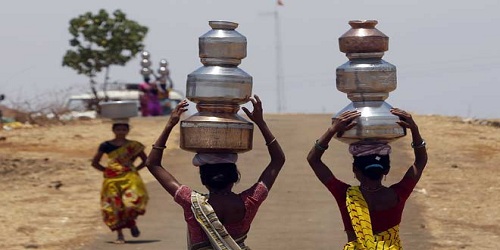 Government’s tailor-made action plan for the most-backward districts:
i. Under this action plan, Government will setup basic services like healthcare, education, sanitation as well as basic physical infrastructure like roads and drinking water supply. These development activities will be carried out in a time-bound manner.
ii. The 115 districts that have been identified include 35 affected by left-wing extremism. These districts were selected on parameters like deprivation (extent of landless households), education (elementary dropout rate and adverse pupil-teacher ratio), health & nutrition (institutional delivery, stunting and wasting in children) and infrastructure (un-electrified homes, lack of toilets, road connectivity and lack of drinking water).
iii. Government’s goal is to bring a transformative change in these backward districts by 2022, the 75th year of India’s independence. This will be done through expediting government-anchored programmes and resorting to necessary interventions.
iv. Respective District Collectors will be the chief executors of the action programmes in these districts.

Government to roll out ‘Condonation of delay scheme’
In order to provide relief for disqualified directors of companies, Union Ministry of Corporate Affairs will roll out ‘Condonation of Delay Scheme’, which will be operational from January 1 to March 31, 2018.
Background Information and Details of ‘Condonation of Delay Scheme’:
i. Earlier, in a bid to clamp down on illicit fund flows, Union Corporate Affairs Ministry had disqualified more than 3.09 lakh directors of companies, who failed to submit annual filings for a long time.
ii .Following this, concerns were raised that many directors of genuine companies have also been disqualified. Some of the disqualified individuals also resorted to litigation.
iii .In order to address these concerns, Ministry of Corporate Affairs decided to come up with this scheme, under which, post submission of filings, the company concerned would have to file a separate form seeking condonation of the delay along with a fee of Rs. 30000.
iv. However, only bona fide directors will benefit from the proposed scheme. This scheme is not open for directors of struck-off companies.

Uttar Pradesh government launches free household power connection scheme ‘Prakash hai to vikas hai’
On 25th December 2017, Uttar Pradesh government introduced ‘Prakash hai to vikas hai’, a free household power connection scheme for the poor people, to mark former prime minister Atal Bihari Vajpayee’s birth anniversary.
Prakash hai to vikas hai:
i. Uttar Pradesh government plans to provide 16 million power connections by the end of 2018 through the ‘Prakash Hai to Vikas Hai’ (the barometer of development is light) scheme.
ii. Uttar Pradesh Power Minister, Srikant Sharma, denied increase in power tariff for the benefit private power suppliers.
iii .BPL (Below Poverty Line) card holders without a roof or having less than Rs 35,000 income per year are eligible for the scheme. They can avail connection by paying Rs 550.
iv. Initial payment for the scheme is only Rs 50. The rest can be paid in 10 instalments of Rs 50.
Some of the recent schemes by central government:
♦ Soil Health Card Scheme – to help farmers to improve productivity by educating them know about nutrient requirements
♦ Skill India – to train over 40 crore people in India in different skills by 2022
♦ Beti Bachao, Beti Padhao Yojana – to improve welfare services for women 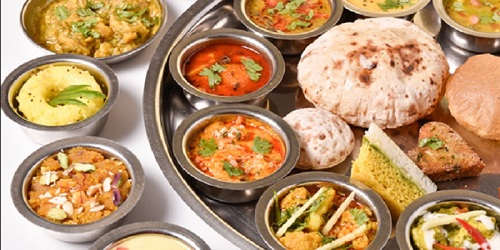 Atal Jan Aahar Yojana:
i. The Atal Jan Aahar Yojana was launched by South Delhi Mayor Kamaljeet Sehrawat and Chairman of the civic body’s Standing Committee Bhupender Gupta and Leader of Opposition Ramesh Matiala at Matiala Chowk.
ii. The Atal Jan Aahar Yojana scheme has been started at 5 outlets in different locations of south Delhi. Its aim is to provide nutritious meal to the poor and needy.
iii .The menu includes puri, chapattis, rice, rajma, vegetables, chhole, and halwa. The meal is provided for Rs 10 from 11 am to 2 pm every day.
Some recent schemes of Delhi government:
♦ Electric Vehicles Subsidy Scheme – Incentives to Shift from Fossil Fuels in Delhi
♦ Free Treatment Scheme for Road Accident Victims in Delhi
♦ Chunauti Scheme to improve learning of students in government & municipal schools in Delhi

Odisha to split tourism & culture department and to promote Odia language
On 26th December 2017, the Odisha government decided to split the tourism and culture department and initiated setting up of Odia Language Commission.
Odisha splits tourism & culture department and promotes Odia language:
i. At the Odisha state cabinet meeting, the tourism and culture department was split. The cultural wing was also renamed as Odia Language, Literature and Culture Department.
ii. It was also decided to set up a ‘Heritage Cabinet’ to protect the monuments and ancient temples. It was also planned to take steps to preserve Odisha’s culture, language and literature.
iii. Among the measures to promote Odia language, is doubling of funds given to ‘Bhagabat Tungis’ to Rs 2,000. ‘Bhagabat Tungis’ are small huts in every village where people narrate the religious text to the locals.
Some lakes of Odisha:
♦ Anshupa Lake – Banki, Cuttack district
♦ Chilika Lake – Puri, Khurda and Ganjam districts
♦ Kanjia Lake – Bhubaneswar Guatemala to move its embassy in Israel to Jerusalem
Guatemalan President Jimmy Morales has announced plans to move country’s embassy in Israel to Jerusalem.
i. Guatemala is the first country to move its embassy in Israel from Tel Aviv to Jerusalem following United States of America (USA’s) recognition of Jerusalem as Israel’s capital on December 6, 2017.
ii. On December 21, 2017, Guatemala was one of the nine nations to vote against United Nations General Assembly (UNGA) resolution rejecting the American recognition of Jerusalem as Israel’s capital.
iii. 128 UN member countries (including India) had voted in favour of this resolution.
iv .Since long time, Guatemala and Israel have strong bilateral ties, especially in security matters. Besides, Israel is Guatemala’s major arms supplier.
Quick Facts about Guatemala:
♦ Capital – Guatemala City
♦ Currency – Quetzal
♦ Current President – Jimmy Morales
♦ Important Rivers – Motagua, Dulce

Govt directs NGOs to open account in any designated bank within month
Union Home Ministry has directed all Non-governmental organizations (NGOs), business entities and individuals who receive funds from abroad to open accounts in any of the 32 designated banks which are integrated with the central government’s Public Financial Management System.
i. Union Ministry of Home Affairs has issued this directive to ensure a higher level of transparency and hassle-free reporting compliance.
ii. Further, it has also stated that such funds should not be utilised for activities detrimental to the national interest.
iii. This directive has been given in context of Foreign Contribution (Regulation) Act 2010.
iv. All such entities/individuals who receive funds from abroad have been given one month time to complete this exercise. 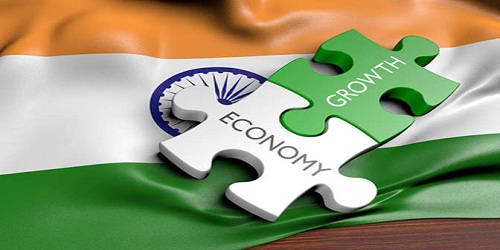 Highlights of Centre for Economics and Business Research (Cebr’s) Report:
i. Cebr Deputy Chairman, Douglas McWilliams  has stated that despite temporary setbacks in past one year (on account of demonetisation and roll out of Goods and Services Tax regime), India’s economy has managed to catch up with that of France and the United Kingdom (UK).
ii. As per the Cebr report, impact of Donald Trump’s Presidency on trade/businesses in USA has been less severe than expected. Thus USA economy will be able to retain its No. 1 position for a year longer than what was anticipated in the last report.
iii. In 2032, China is likely to overtake the United States as world’s No. 1 economy. SLCM ties up with HDFC, IndusInd bank for post-harvest credit
On 26th December 2017, Sohan Lal Commodity Management (SLCM) announced its tie up with HDFC Bank and IndusInd Bank to provide collateral management services.
SLCM ties up with HDFC, IndusInd bank:
i. This tie-up is aimed to improve farmers’ access to post-harvest credits at affordable interest rates. It will also provide easy access to scientific storage facilities.
ii. SLCM is present in 17 states of India. It has a network of 2,100 warehouses. It has strong scientific management system for 725 commodities like cotton, pulse, maize, spices, etc.
About IndusInd Bank:
♦ Headquarters – Mumbai
♦ Chairman – R.Seshasayee
♦ CEO – Romesh Sobti

Dornier 228 becomes first plane to be made in the country for commercial flights
Directorate General of Civil Aviation (DGCA) has allowed Hindustan Aeronautics Ltd (HAL) – manufactured Dornier 228 for civilian flights. 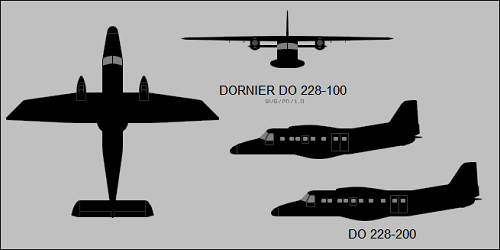 About Dornier 228:
i. Dornier 228 is a 19-seater aircraft which was only used by defence forces till now.
ii. It will now become the first ‘Made in India’ plane to be used for commercial flights.
iii. On account of DGCA’s certification, HAL can even sell this plane to other airlines in India, which can be used for regional flights under central government’s UDAN scheme.
Quick Facts about HAL:
♦ Founded in – 1964
♦ Headquarters – Bengaluru, Karnataka
♦ Governed by – Indian Ministry of Defence

Dr Jitendra Singh launched e-HRMS on Good Governance Day
On December 25, 2017, Union Minister of State for PMO, Personnel, Public Grievances & Pensions launched electronic-Human Resource Management System (e-HRMS).
i. e-HRMS is a software that provides a comprehensive and combined view of the human resource deployed by the Government.
ii. e-service book, launched for Department of Personnel and Training (DOPT) employees in March 2017 will also be integrated into the e-HRMS. E-service book is an initiative taken to fully automate live updating of all records………………………………………….Click here to Read more 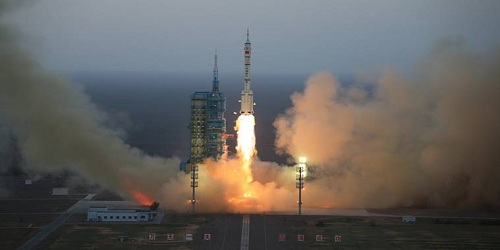 Typhoon Tembin strikes Philippines
Typhoon Tembin has devastated southern Philippines and has killed more than 120 people with 160 missing.
Typhoon Tembin in Philippines:
i. Typhoon Tembin caused a series of flash flooding and landslides in southern Philippines. Island Mindanao is the most affected part.
ii. Around 70,000 people were evacuated to safer places. Emergency state was declared in many parts on Mindanao.
iii. It is said that many villagers had ignored warning announcements. They failed to leave coastal areas and riverbanks. This caused great damage as people were swept away by flash floods and landslides.
About National Institute of Oceanography, India:
♦ Established – 1966
♦ Research type – Advanced science and technology
♦ Director – Prof. Sunil Kumar Singh 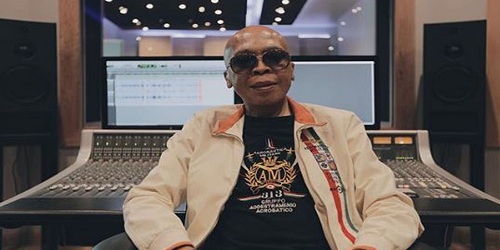 Death of Robbie Malinga:
i. Robbie Malinga was 49 years old. It is said that he was suffering from anemia. The cause of his death has not yet been revealed.
ii. He retired as a solo artist in 2016. His career spun over 20 years.
About Robbie Malinga:
♦ Occupation – musician
♦ Famous shows – A Date with Arthur, Afro Cafe, Clash of the Choirs South Africa etc.