We are here for you to provide the important current affairs August 21 2018 which have unique updates of all daily events from all newspapers such as The Hindu, The Economic Times, PIB, Times of India, India Today, Indian Express, Business Standard, all Government official websites. Our complete current affairs helps you to get more marks in Banking, insurance, UPSC, SSC, CLAT, Railway and all other competitive Exams. Government bans pet coke import for fuel use
India banned the import of pet coke as fuel use but it will be allowed to use as feedstock in some industries. 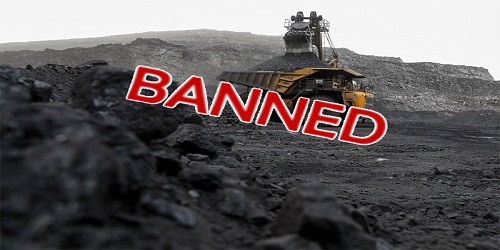 i. Cement, lime kiln, calcium carbide and gasification industries are only allowed to use import of pet coke  as the feedstock or in the manufacturing process on actual user condition.
ii. India is one of the world’s largest consumers and imports over 27 million tonnes from the United States.
Why India consumes Pet coke?
India is the world’s biggest consumer of petroleum coke, which is a dark solid carbon material that emits 11 per cent more greenhouse gases than coal, according to the CarnegieTsinghua Center for Global Policy.
What is Petroleum coke or Pet coke?
i. Petroleum coke, abbreviated coke or petcoke, is a final carbon-rich solid material that derives from oil refining, and is one type of the group of fuels referred to as cokes.
ii. There are four basic types of petroleum coke, namely, needle coke, honeycomb coke, sponge coke and shot coke. Different types of petroleum coke have different microstructures due to differences in operating variables and nature of feedstock.

Punjab Cabinet okays amendments to CrPc & IPC to make sacrilege punishable with life imprisonment
On August 21st 2018, The Punjab Cabinet approved amendments to the Indian Penal Code (IPC) as well as the Code of Criminal Procedure (CrPC) to make disrespect of religious texts punishable with life imprisonment.
i. The Cabinet has approved the withdrawal of the Code of Criminal Procedure (Punjab Amendment) Bill, 2016 and the Indian Penal Code (Punjab Amendment) Bill, 2016, passed in the 12th Session of 14th Vidhan Sabha, 2016.
ii. The decision was taken at a meeting chaired by Chief Minister Amarinder Sing.
Section which inserts to the Indian Penal Code (IPC):-
The Cabinet has approved insertion of section 295AA to the Indian Penal Code (IPC) to provide that – whoever causes injury, damage or sacrilege to Sri Guru Granth Sahib, Srimad Bhagwad Geeta, Holy Quran and Holy Bible with the intention to hurt the religious feelings of the people, shall be punished with imprisonment for life.

Centre says Kerala floods ‘calamity of severe nature’
On August 21 2018 , Centre has declared the Kerala floods as a calamity of “severe nature”. The central government has also scaled up its relief and rescue operations.
i. Minister of State for Home Kiren Rijiju said the Kerala floods were being treated as natural calamity of severe nature.
ii. National Crisis Management Committee (NCMC), chaired by Cabinet Secretary PK Sinha informed that Centre dispatched 100 tonnes of pulses and 52 tonnes of essential medicines to the State. Around 20 tonnes of bleaching powder and 1 crore chlorine tablets.
iii. Ministry of Power has moved equipment such as electricity meters, coils and transformers to restore the distribution network. Other renames in the name of Atal Bihari Vajpayee
Chhattisgarh Chief Minister Raman Singh announced the renaming of some other institutions and projects after Vajpayee.
i. The Bilaspur University will be known as Atal Bihari Vajpayee University
ii. Narrow Gauge Line will be called Atal Path.
iii.  The Central Park, which is being constructed will be named as Atal Park.
iv. Vajpayee’s contribution to Pokhran nuclear test, a police battalion will be known as ‘Pokhran Battalion’.
v. The Rajnandgaon Medical College will also be renamed after Vajpayee.
vi. Madhya Pradesh government decided to build two memorials in Gwalior and Bhopal after the former PM.
vii. Shivraj Singh Chouhan government also agreed to name the Global Skill Park after Vajpayee.
viii.Moreover, on November 1, the statehood day, ‘Atal Bihari Vajpayee Sushasan award’ will be given to panchayats and urban bodies for good governance. Centralised secretariat at Panchkula to tackle drug menace:
i. This decision was taken at the regional conference of the Chief Ministers organised by the Haryana government on “Drug menace, challenges and strategies” in Chandigarh.
ii. At the centralised secretariat at Panchkula nodal officers from each State will be assigned to share intelligence and information.
iii. This will help to exchange information on drug trends, cases registered and persons named, wanted or arrested.
iv. Monthly meeting for special task forces and quarterly meetings at the level of Home Secretaries will be conducted to build inter-agency trust.
v. All states have agreed to set up more de-addiction centres and to strengthen the existing ones in both public and private sector.
Some National Parks in Haryana:
♦ Sultanpur National Park
♦ Kalesar National Park i. It was inaugurated by Gp Capt CUV Rao, team leader IAF & Col Mahadzer, Ex director of RMAF. It’s a platform to exchange Knowledge & Good practices with each other.
ii. RMAF and IAF ended its first ever bilateral exercise launching two Sukhoi Su-30MKM and Su-30MKI Flankers each from Subang airport.

iii. Private cash handling agencies should collect money from banks in the first half of the day. They should provide private security for the cash transportation. Every cash van should have one driver, two armed security guards, two ATM officers or custodians.
iv. Cash transportation should be performed only in secured cash vans equipped with GPS tracking device. A cash van should not carry cash more than Rs 50 million per trip.
v. Private security agencies should appoint a person for cash transportation only after they have undergone antecedent check like police, Aadhaar and residence verifications, previous employer check, credit history check and fidelity insurance.
vi. Every cash box should be secured to the floor with separate chains and locks that can be opened only using separate keys kept with different custodians.
vii. Cash vans should be equipped with: small CCTV system with a minimum of 5 days of recording facility and 3 cameras installed in front, rear and inside of the cabin; a security alarm with GSM-based auto-dialer with a motorised siren; hooter, fire extinguishers and emergency lights.
viii. Private security agencies should ensure that all cash handling activities like counting, sorting, and bundling activities should be performed in secured premises as per specific guidelines.
ix. The premises should have two physically independent areas, one for general office purpose and other for secured cash processing and handling activities. It should have space for cash deposit, collection, sorting, counting and delivery and dispatch of cash on secured cash vans. 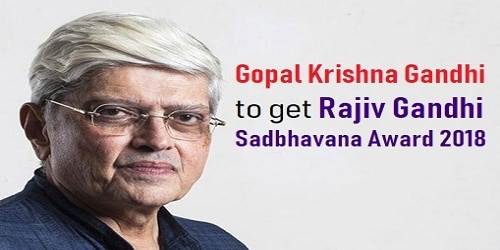 International team of scientists including 18 Indians decode complex wheat genome
On August 19 2018, A team of international researchers have decoded the wheat genome. Eighteen Indian scientists from that team played a crucial role in cracking the genetic code of wheat – the world’s most widely cultivated crop.
i. The research article is authored by more than 200 scientists from 73 research institutions in 20 countries.
ii. A team of 18 Indian scientists co-authoring this paper, led by Dr Kuldeep Singh at Punjab Agricultural University (PAU) Ludhiana, Professor JP Khurana at the University of Delhi South Campus, and Professor Nagendra Singh at ICAR-National Research Centre on Plant Biotechnology, Delhi, contributed to the decoding of Chromosome 2A of the wheat genome.
iii. The genetic information, scientists say, would help Indian plant breeders create better wheat varieties capable of tolerating heat and drought without compromising the yield.

World’s first 4D printing for ceramics developed
On August 20 2018,Scientists have developed the world’s first 4D printing for ceramics, that can be used to create complex, shape-changing objects.
i. Ceramic has a high melting point, so it is difficult to use conventional laser printing to make ceramics.
ii.The existing 3D-printed ceramic precursors are usually difficult to deform, also hinder the production of ceramics with complex shapes.
iii. Now this drawback has been resolved  by scientists new innovates novel ‘ceramic ink’, which is a mixture of polymers and ceramic nanoparticles. These flexible and stretchable ceramic precursors allow complex shapes, such as origami folding, to made using proper heat treatment.
iii. The research team at the City University of Hong Kong made use of the elastic energy stored in the stretched precursors for shape morphing. When the stretched ceramic precursors are released, they undergo self-reshaping. After heat treatment, the precursors turn into ceramics.
Other facts:-
4D printing is conventional 3D printing combined with the additional element of time as the fourth dimension, where the printed object can re-shape or self-assemble itself over time with external stimuli, such as mechanical force, temperature, or a magnetic field. 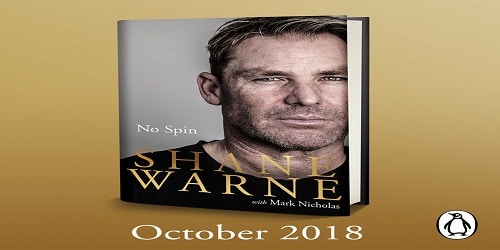 i. Andrew Goodfellow, deputy publisher at Ebury press announced that Warne’s memoir “No Spin” will have a global release on October 4 2018.

International Day of Remembrance and Tribute to the Victims of Terrorism, 21 August
UN Secretary-General, António Guterres informed that General Assembly to establish an International Day of Remembrance of and Tribute to the Victims of Terrorism due to Terrorism continues to pose a major threat to international peace and security. It undermines the core values of the United Nations and is an indiscriminate threat that affects people and countries across the globe. 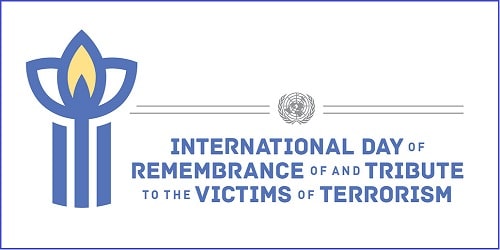 Objective:-
Observance of the International Day of Remembrance of and Tribute to Victims of Terrorism represents a major step forward in standing in solidarity with victims of terrorism. By inviting Member States, the United Nations, international organizations and civil society entities to observe the Day, attention to victims will be focused at the national, regional and international levels.
Other Facts:-
i. To observe the first International Day, the Permanent Missions of Afghanistan, Belgium, Iraq, Nigeria, and the United States, along with the United Nations Office of Counter-Terrorism (UNOCT) and the Counter-Terrorism Committee Executive Directorate (UNCTED) will launch a multimedia exhibit at the Exhibition Hall, Visitors’ Lobby at the United Nations Headquarters in New York.
ii. The month-long exhibition (1 August – 4 September 2018) includes interviews and documentaries that highlight international solidarity with victims, shows positive stories of victims’ resilience and illustrates what has been done for and by victims over the last decades.
UNODC also marks its first terrorism victims remembrance day:-
United Nations office on Drugs and Crime(UNODC)’s Secretary-General also remarked on the first International Day of Remembrance of and Tribute to the Victims of Terrorism. UNODC’s work to support victims of terrorism is being rolled out through a range of activities.

National Sadbhavana Day – August 20
Sadbhavana Diwas 2018 (74th birth anniversary of Rajiv Gandhi) will be celebrated all over the India at on 20th of August.
i. The Sadbhavana (means having good feelings for others) Diwas or Harmony Day is celebrated to commemorate the birth anniversary of the earlier Prime Minister of India named Rajiv Gandhi.
ii. It was also used to celebrate by many of the people in order to give the Respect and Salutations to many of the good people in India and many other Countries.