We are here for you to provide the important current affairs of August 21 2017 which have unique updates of all daily events from all newspapers such as The Hindu, The Economic Times, PIB, Times of India, India Today, Indian Express, Business Standard, all Government official websites. Our complete current affairs helps you to get more marks in Banking, insurance, UPSC, SSC, CLAT, Railway and all other competitive Exams. 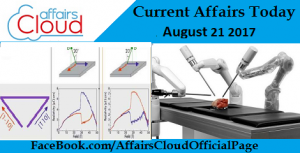 Dr. Jagdish Mukhi commissioned IN LCU L52, Second Ship of Landing Craft Utility into the Indian Navy at Port Blair
On August 21, 2017 Dr. Jagdish Mukhi, Lieutenant Governor, Andaman and Nicobar Islands, commissioned IN LCU L52 into the Indian Navy at Port Blair. IN LCU L52 is the second Landing Craft Utility (LCU) Mk-IV class .
i.This ship has been designed and built by Garden Reach Shipbuilders and Engineers, Kolkata. LCU MK-IV ship is used to transport and deploy Main Battle Tanks, Armoured Vehicles, troops and equipment from ship to shore.
ii.This ship has multirole activities like beaching operations, search and rescue, disaster relief operations, supply and replenishment and evacuation from distant islands.
iii.Commander Kaushik Chatterjee, will be commanded with 05 officers, 46 sailors and is capable of carrying 160 troops
iv.The ship, displacing 830 Tons, is capable of transporting various kinds of combat equipment such as Main Battle Tanks Arjun, T72 and other vehicles.
v.The ship is fitted with state-of-the-art equipment and advanced systems like Integrated Bridge System (IBS) and Integrated Platform Management System (IPMS).
The remaining of six ships with the same class at M/S GRSE, Kolkata are expected to be inducted in the next two years. The induction of these ships will contribute to the nation’s maritime security needs and is in consonance with ‘Make in India’.

40% reservation for girls at planned schools, higher edu inst.
Union minister Mukhtar Abbas Naqvi has informed that the government has decided to offer 40 per cent reservation for girls at 100 Navodaya-type schools and five higher education institutes.
i.A panel formed by The Maulana Azad Education Foundation (MAEF), a government-funded agency, had recommended a three-tier model to tackle educational backwardness among minorities, particularly the Muslims. 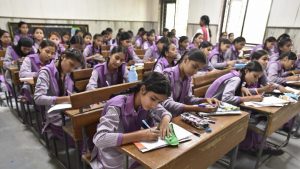 ii.There are six notified minority communities in the country: Muslims, Buddhists, Christians, Sikhs, Parsis and Jains.
iii.The suggested model includes creating infrastructure to impart education at primary, secondary and tertiary levels by opening 211 schools, 25 community colleges and the five institutes.The proposed schools could work on the patterns of Kendriya Vidayala or Navodaya Vidyalaya.
iv.Students from various rural areas will be selected and provided with quality education,food and lodging facilities under the Navodaya Vidyalaya system.
Multi-sectoral development programme (MsDP) is for developing infrastructure and creating assets in areas dominated by minority community with an aim to take tangible and intangible benefits to them.The governments in Rajasthan and Uttar Pradesh have expressed interest in setting up the institutes for higher education. 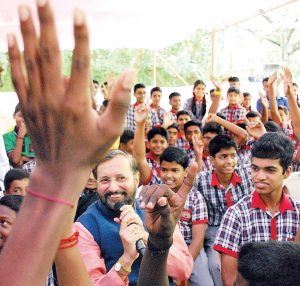 Lost wreckage of warship USS Indianapolis found in pacific after 72 years
A team of civilian researchers led by Microsoft co-founder Paul Allen has discovered the wreckage of World War II warship USS Indianapolis nearly after 72 years. It is 18000 feet (5.5 km) below the surface in the Pacific Ocean. It has been announced on 18th of August 2017.
Key Notes:
i.The Indianapolis was destroyed returning from its secret mission to deliver parts for the atomic bomb which was later used on Hiroshima. 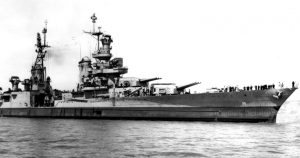 ii.Of the 1,196 men on board, just 316 were rescued – the largest loss of life at sea in the history of the US Navy. Only of them, 22 are alive today.
iii.The USS Indianapolis was destroyed on 30 July 1945 when, somewhere in the Philippine sea between Guam and Leyte, it was hit by a torpedo from a Japanese submarine.
iv.The wreck was located by the expedition crew of Paul Allen’s Research Vessel Petrel, a 250 foot vessel equipped with high-tech equipment capable of diving to 6000 meters.
v.The 13-person crew was led to the location of the USS Indianapolis through the research carried out in 2016 by Richard Hulver, a historian with the Naval History and Heritage Command.
vi.The information rendered by the landing craft led the research team to a new position and estimated the search area for Allen’s team.
vii.The crew will continue to survey the site and tour of the wreckage in compliance with relevant US law for searching war graves.

US-South Korea begin annual “The Ulchi Freedom Guardian “military drills
The Ulchi-Freedom Guardian is a military drill which sees the US and South Korea join forces in a string of exercises.
i.The annual drill involves huge land, air and sea exercises, with tens of thousands of troops involved from both countries.
ii.The exercises, designed to improve South Korea’s defence, are carried out to recognise the treaty between the Republic of Korea and the United States signed in 1953.
iii.They are named after a famous Korean general, Munduk Ulchi, who lived in the early seventh century and was a successful army leader.
iv.The drill is expected, from August 21 to August 31, 2017.It also involves computer-simulated war games with 30,000 American and 50,000 South Korean troops, according to South Korea’s defence ministry and the US military command in Seoul.
v.It is believed the exercises will involve around 17,5000 US troops mostly involved in the simulation side of the drills. 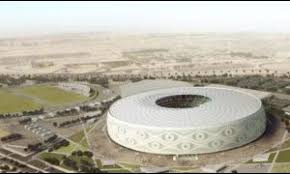 Qatar will build a stadium shaped like an Arabian cap for the 2022 FIFA World Cup.
i.This symbolic design embodies everything that unites us as Arabs and Muslims, and is a fitting tribute to the first FIFA World Cup in the Middle East. Qatar is building at least eight air-conditioned stadiums for the tournament.
ii.Doha’s Al Thumama stadium, designed by a Qatari architect in the shape of a traditional knitted “gahfiya” Arabian cap, will host 40,000 fans at a World Cup quarter final match, the country’s 2022 organising body. 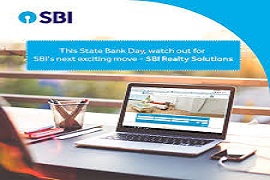 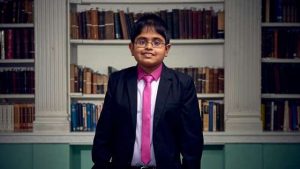 iii.He has a vast knowledge of his chosen subject – Edward Jenner’s medical innovation and methodology in 18th Century England.
iv.The school boy from north London clinched the title by answering a question on 19th Century artists William Holman Hunt and John Everett Millais.
v.Rahul has an IQ of 162, which is believed to be higher than the likes of Albert Einstein and Stephen Hawking.
vi.He qualifies to be a member of Mensa club – the largest and oldest high IQ society in the world.
vii.Rahul ambition is to become a financial adviser.

Microsoft acquires Cycle Computing to accelerate users’ movement to cloud
Microsoft has announced the acquisition of Cycle Computing on 21st of August 2017. It will help it easier for Azure customers to use High Performance Computing (HPC) and other Big Computing capabilities in the cloud and help them accelerate their movement to the cloud.
Key Points:
i.Cycle Computing makes optimizing Hybrid HPC workloads easier and the process of bursting or migrating HPC clusters to the cloud more productive.
ii.It offers tools that help companies orchestrate and manage large scale compute jobs across hybrid environments.
iii.Azure has a massive global footprint and more than any other major cloud provider.
iv It also has powerful infrastructure, Infini Band support for fast networking and state-of-the-art GPU capabilities.
v.Microsoft can now support its expertise in extending and migrating Linux and Windows based HPC jobs to the cloud by acquiring Cycle Computing.
vi.The cloud gives customers the on-demand power and infrastructure necessary to run massive workloads at scale without the overhead.
About Microsoft
Microsoft Corporation is an American multinational technology company with headquarters in Redmond, Washington. 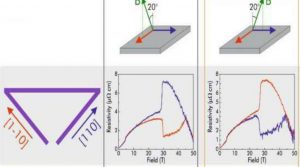 UK scientists create world’s smallest surgical robot
UK Scientists have developed the world’s smallest surgical robot with low-cost technology. It is used in mobile phones and space industries.
Key Points:
i.The robot named Versius, mimics the human arm. It can be used to carry out a wide range of procedures in which a series of small incisions are made to circumvent the need for traditional open surgery.
ii.One of the key benefits of the robot is that it works like a human arm and contains technology that detects resistance to make sure the right amount of force is used when the instruments are inside the patient.
iii.The robot is much easier to use than existing systems, and take up about a third of the space of current machines. 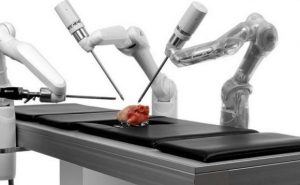 iv.These include hernia repairs, colorectal operations, as well as prostate, ear, nose and throat surgery.
v.Such procedures reduce complications and pain after surgery and speed up recovery time for patients.
vi.The robot is controlled by a surgeon at a console guided by a 3D screen in the operating theatre.
vii.Researchers used electronics from mobile phones to help the robot “think” and process information.
viii.The gear box technology originally designed for the space industry to help it move. The robot is set to be launched next year.

Pune farm sees country’s first calf born to surrogate cow
i.In Indapur, about 140 kilometres from Pune, the Pathan family celebrated the birth of a new family member Vijay, the country’s first calf delivered by a surrogate cow through In Vitro Fertilisation (IVF) technology carried out in a mobile laboratory.
ii.Dr Shyam Zavar, CEO of JK Trust, an organisation which works at improving cattle breed informed that through IVF technology, it can give birth to 20 calves in a year through surrogate method with recipient cow, which means nearly 200 in its lifetime.
iii.About 50 embryos can be produced by a donor cow in a year.

FIBA Asia Cup: Australia crowned champions of Asia on tournament debut in Lebanon
Australia, playing for the first time at the rebranded FIBA Asia Cup, became the first Oceanic team to be crowned champions of Asia.
Key Points:
i.Australia has beaten Iran in final held on 20th August 2017.
ii.The Australian Boomers have won the FIBA Asia Cup in their first attempt with a commendable victory over Iran in the gold medal game.
iii.Total 16 teams have participated and Australia has got 79 points and runner team Iran got 56 points. 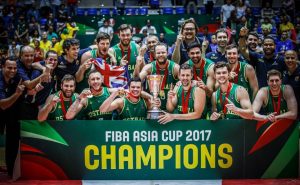 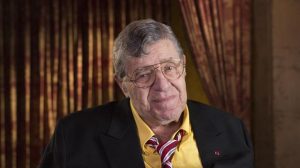 ii.He starred in more than 45 films in a career spanning five decades.
iii.He was hailed as ‘le Roi du Crazy’ (the king of crazy) and inducted into the Legion of Honor, France’s highest award, in 1984. He received a similar honour in 2006.